Developing software is not a set in stone method. There is no universal approach to it or the right way to do it. Sometimes a development process fits the software that you are trying to make like skin, but sometimes you have to go for unconventional methods. It all depends on your needs and the type of software that you are developing.

Over the years, enterprise software development has evolved drastically; new methods have surfaced, making the process more streamlined, transparent, and efficient, and older workflows have been discarded. But again, it is an iterative process, and every few years a new development process becomes the hot trend.

Software Development Lifecycle is a systematic series of steps to develop and test high-quality software. SDLC allows developers to not only approach software development in a systematic way, but it also allows them to deliver it on time and in the budget. SDLC is a development tracking mechanism, broken into seven steps that are to be carried out in a particular series. Following it makes it easier for the developers to plan the project and offer near-accurate time and cost estimations. Each step in SDLC has its own subprocesses and provides deliverables that are used as input by the next step in the process. SDLC helps in speedy and cost-effective software development, and by increasing visibility and transparency, it helps developers in creating better relations with their customers and decreases project risk.

7-Steps to Develop an Enterprise Software

SDLC is broken into seven steps that are to be carried out in the sequence that has been laid down below. It is to be kept in mind that following this sequence will provide optimal outcomes while deviating from it might not have the desired result. 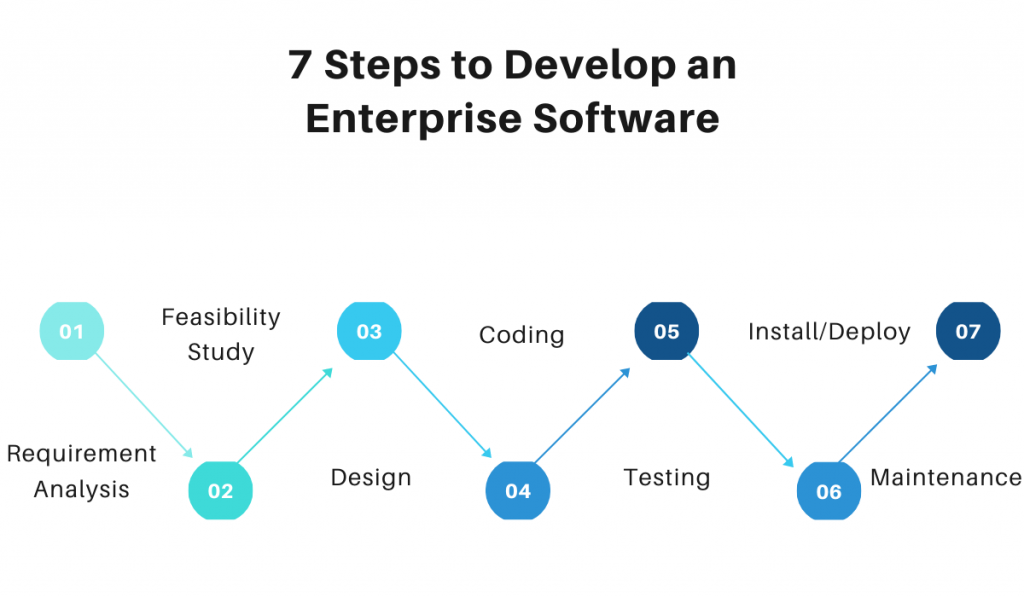 Each of the above steps has been explained below:

Requirement Analysis is the first step in the SDLC process. It is where the board members and stakeholders get together to devise a plan of action and decide what exactly is wanted out of the software. This is where all the operations that are required from the software are laid down.

Once that is done, they can get a clear picture of the amount of effort and money that they will have to put into this project, and a clear timeline is also decided. The scope of the project is finalized in this stage as well, and all the issues that might be faced somewhere down the line are identified too.

Based on the requirements that are laid out in this phase, along with the timeline and the budget, other things are thought of as well. The tools that will be required are bought, the talent needed for this project is hired, etc.

With the help of this phase, enterprises can reduce the risk involved in software development since there are no hidden faces to it. Everything that will be required for this project is laid out right in the beginning, and thus, the enterprise can operate according to that plan.

This is the second step in SDLC, and the deliverables from the first step are used in this step to create documents. This is also the step where the minor details about the project are finalized as well. And once that is done, all of this data is documented so that everyone knows the plan, and there is no barrier of knowledge.

The deliverable of this step is a Software Requirement Specification document that contains everything that is to be designed, all the data about the software’s dependencies, every minor detail, from the language it will be programmed in, to different use cases, all of it put in this document.

There are five different types of feasibility checks:

The output of the previous phase, the SRS document, is now used to design the software. Different modules are built and documented, software architecture is developed according to the scope of the project. This is where the nooks and crannies of a project are defined and designed, from the smallest of modules to the overall architecture of the software.

There are two different types of design documents created in this step:

This is the longest and most difficult phase of the project. Coding is the step in which the deliverables of the previous step are used, and developers start to actually create them, to code them in the language that was decided in the first step.

The software is broken into different modules in the Design step, and so, each developer is given a module, and they have to work on it on their own while their teammates work on their own modules individually. This can also be a process where sometimes developers need some help, especially if it is a new language for them.

The entire team works under a project manager, and it is his responsibility to keep track of all their works. But while tracking is crucial, a project manager must also keep in mind to not push his team members too hard. Coding is a taxing job, and a developer needs to focus, and he cannot do it if you are constantly pushing them to deliver their module.

Once all the modules have been developed, they are put together, and if everything goes as planned and there are no dependency errors or conflicts, then what you have at the end of this process is a fully functioning software, ready for the next step of SDLC. 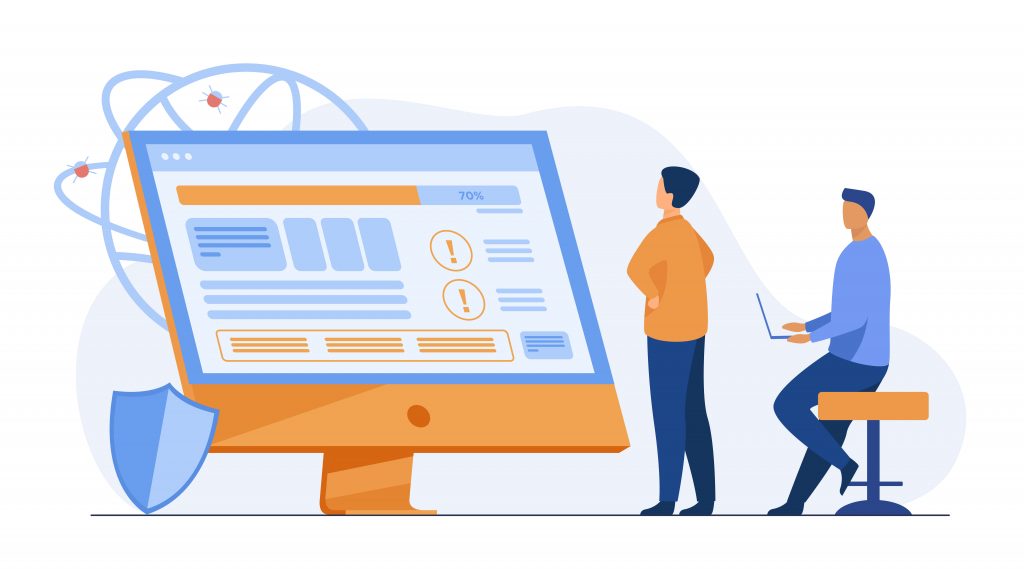 Once the developed software is ready, it is deployed to the testing environment where a team of QA engineers works with it. Their prime task is to find flaws, glitches, inconsistencies, and bugs, functional or UI/UX, in your software.

They put your software through various testing cycles and conduct different tests to make sure that the final deliverable of the software development process is a high-quality and bug-free software.

Your QA engineers will put your software through different tests, some of them are as follows:

Once the software is tested and free of bugs, it is ready to be deployed and make its way to the stakeholders. If the project manager gives the go-ahead once all the bugs have been fixed, the software is deployed. Some companies also make use of automated deployment tools as well.

Once the software has been deployed, it is time to keep it running and upgrade it according to your client’s needs or your stakeholder’s needs. Some new additions to the software, some tweaks in the UI, all of it after the deployment process falls into this step. Regular upgrades and security fixes for the latest cyber threats are also necessary to keep the software safe from outside attacks.

Even after being extra cautious, sometimes some bugs manage to slip past the QA engineers, and they are fixed in this phase when they are flagged by the users or the stakeholders.

There is no fixed process to develop enterprise software, and different developers can use different approaches, but still, the above-mentioned steps will be found in most of these processes in one form or another. So it is crucial for you to know about them. SDLC offers a detailed plan to develop software, compels you to document that plan with even the most minute of details, then design, code, and test that product and finally deploy it and, over the years, maintain it and make sure that it keeps giving the high-quality results.

Three most famous SDLC processes are:

Agile Development is an incremental process that breaks the development cycle into multiple builds. In each build/sprint, the developers and the clients sit together and discuss the goals that they want to achieve. Then the developers work to achieve that target, and during that period, they are in constant contact with the project manager. At the end of every sprint, they show the results to their clients or stakeholders and get new targets.

This SDLC process breaks the development process into different phases, and the outcome of one phase is fed to the next one as input. This process involves rigorous document making as well to keep track of the plan and make sure that everything works accordingly.

Best Inventory Management Strategies to Boost your Business Efficiency in 2022

Top 10 Enterprise Software Development Solutions to Consider for Your Business

Give us a call or fill in the form below and we will contact you. We endeavor to answer all inquiries within 24 hours on business days.
+1-408-560-1910
info@matellio.com
Need Help with Your Project?

Connect with our experts over a free consultation call and get the best services tailored to your business requirements.