DevOps stands for development and operation. With the efficient integration of development tools with the operation tools, software development got a push towards progress. The enhanced collaboration between the operations and development team unifies them for better communication, seamless output, and increased quality and quantity of production. DevOps ensures bug-free releases with the help of continuous development, deployment, and testing, while a noticeable upheaval from conventional development processes.

DevOps is implemented using varied tools, where the aim is just to streamline the processes and speed up delivery. Here are the nine most popular tools companies use for implementing DevOps in 2022. 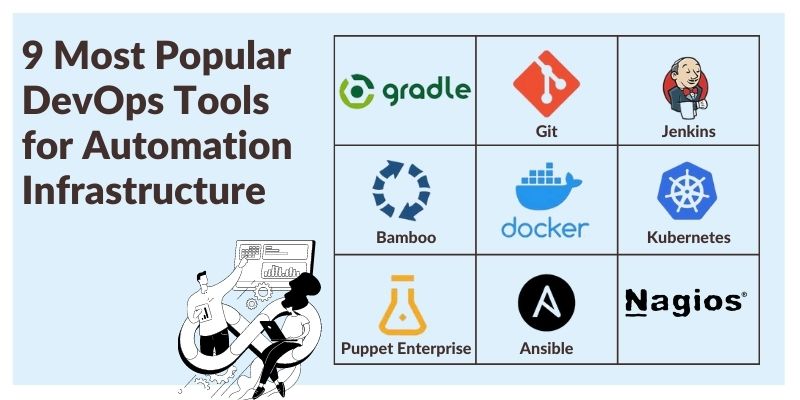 Gradle came into existence in 2009, and now it is a reliable tool that ensures the conducive development process. In 2009, Gradle introduced a Groovy-based DSL when Maven and Apache Ant were reigning the market, but Gradle got a high level of popularity. Gradle enables developers to code in HLLs such as C++, Java, and Python and is supported by IDEs such as Netbeans and Eclipse. Gradle is also chosen to be the official tool for Android Studio. Gradle uses Groovy-based DSL, unlike Ant and Maven, which uses XML for configuration. For enabling the developers to write in Kotlin, Gradle released the Kotlin based DSL. In contrast, for the developers having prior experience with Maven, the dependency management completely resembles the Maven repository format.

Versioning is the most crucial part of software development and operations. The source code management tool, Git, enables the developers to maintain the code version and restore the previous version whenever needed. Software developers and remote teams widely use the tool. The tool is great for experimenting, where a developer can create the branches for giving any changes in the code and then merge the changes if approved.

Integrating the DevOps workflow requires you to host the repositories for your development team to push the changes. Github is a well-known repository where the developer gets free access to public repositories.

Jenkins is an open-source automation tool that enables continuous integration and development with the automation of the development to delivery stages. The main reason for the popularity of the software tool is its plugin ecosystem. Jenkins offers more than 1000 plugins, making it best to integrate with almost all DevOps tools. With Jenkins, the developer can code and deploy iteratively for larger projects.

Bamboo is similar to Jenkins and allows to automate the development lifecycle from building code to end-level deployment. The product delivery pipeline becomes smooth with the integration of tools with Bamboo. Unlike Jenkins, Bamboo comes with a price and avails pre-built functions, decreasing the need for many plugins. The tool offers easy integration with Atlassian products like Bitbucket and Jira and comes equipped with built-in Git. The powerful tools save the configuration time and come with handy components.

It is one of the most important container platforms and tools used mainly for a distributed development environment. Docker makes applications more secure by isolating them in separate containers. Docker apps are platform-independent and can be run on virtual machines. With Docker, the developer is not needed to think about dependency management. The solution is to pack all dependencies into an app’s container and distributes the whole package as a unit to be run on any machine.

The containers are also integrated with Jenkins improving the workflow and being popularly used for cloud computing. The giants in the cloud industry give support for Docker, which makes cloud migration easier.

It was released in 2015, and since it has been a favorite one for developers. Kubernetes is interpreted as a platform to manage hundreds of containers with ease which works efficiently with Docker or its other alternatives. You can easily group all containers into logical units, although you wouldn’t need it in the case of a few containers. If you need to scale resources, it empowers you to automate the whole process of managing several containers. Furthermore, you can deploy containerized apps to a group of computers and seamlessly permits automation of the scheduling of containers and the distribution across the entire cluster. It consists of a single master and various worker nodes and extends its attention to everything.

It becomes easier to deliver software expeditiously and securely as Puppet enterprise automates infrastructure management. It provides an open-source tool to developers for small projects; on the other hand, role-based access control, node management, real-time reports, etc., features for a large project. It automatically extrapolates relationships within the infrastructure and effectively handles failures, and deals with dependencies. Once it faces a failed configuration, it automatically skips the dependent configurations. It has been designed to rapidly inspect, manage, and maintain infrastructure, which deploys the resulting change within a few hours.

Like Puppet, it’s a configuration management tool that is used to configure infrastructure and automate seamless deployment. The prominent feature of the secured and lightweight solution, Ansible, is agentless architecture, simplicity, amplified development process, management of complex deployments, and many more. It supports a variety of applications and avoids complexity at every stage. Ansible helps automate and integrate development, testing, seamless deployment, and effective performance management.

Nagios is interpreted as the most famous open and free source among all DevOps monitoring tools. It enables you to keep records of outages, events, errors, security threats, and failures through the help of its graphs and reports. It monitors your database, network, application, protocol, and logs that detect issues relating to its infrastructure before discovering any risk. Furthermore, it creates maintenance schedules and infrastructure upgrades, and monitors detect critical network infrastructure.

DevOps helps in removing silos in enterprises and discovers cross-functional teams, which eliminates dependency on any individual or team during the entire delivery process. The series of continuous communication among teams improves the efficiency and confidence of every team member. Through automation and the use of DevOps, the development team in Matellio can aggrandize productivity, which results in a better working environment, enriched trustworthiness, reduced unplanned work, and most valued consumer satisfaction.

At Matellio, we develop custom solutions that fit perfectly with your business goals. Our team of dedicated developers and experts possess wide expertise in DevOps implementation and strategies. We have developed several digital solutions that have received commendable feedback from our clients and their users. Our streamline process allows us to develop flawlessly engineered solutions that contribute to your business growth. We have a list of engaging models that keeps your budget under control. Connect with our experts over a 30-min free consultation call for more details!

How to Develop Boutique Management Software?

How Much Does it Cost to Develop a Travel Portal?