Increasing demand for businesses has pushed the existence of mobile apps into every industry verticals. The cost overhead, time requirement, and Management complications fears the stakeholders to initiate the development task. Smart owners aim to build a potential development team to create successful mobile applications. Before a few years, coding was difficult and was based only on text editors. Debugging and testing were all done manually. Today Integrated Development Environment has made software or mobile app development simple and easy. This article will deal with the best IDE for iPhone app development. 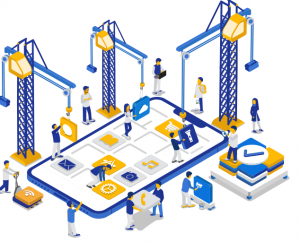 IDE is the acronym for Integrated Development Environment. This contains a set of tools, resources and programming essentials within itself. It helps software/web/ mobile app developers to create new programs. This is a comprehensive solution for creating software or mobile app independently. These resources make development, deployment and debugging processes very simple. Choosing an IDE for iPhone app development is dependent on the budget, kind of programming language you prefer, etc. There are so many functionalities in an IDE that gives you a lot of benefits for app development.

The IDE makes strategies and streamlines the development phase for your entire team. It has many tools for automation, programming, debugging, compiling and for interpretation. There are three general types of IDE available. They are cloud-based, software as a service(SaaS) type and installing on the server type. IDE for iPhone app development is preferred by development companies to reduce development time and costs. It helps in accurate testing and easy coding. Integration is also possible with these IDEs. It is as simple as a word processing program used by developers to create robust mobile applications.

What is the best IDE for iPhone app development?

The features of XCode are given here:

All of these features are exclusive for the Apple operating system and is highly beneficial. Also, this is a costless platform for creating user-friendly apps for Apple devices. This can help developers in building a productive platform for your application. This is integrated with Cocoa and Cocoa Touch Frameworks. It is also one of the most recommended IDE for iPhone app development. If you are aiming to speed up the development process, then you can introduce this IDE to your team. This can guide your company’s team completely for iOS programming.

The coding and programming environment of this IDE is also excellent. It helps to make your workflows seamless and enhances productivity. Your development team also gets an assistant editor that is built in. This suggests quick codes and suggestions avoid mistakes and finish the development process faster than before. This is ultimately designed for Apple devices. So there are different tools that can support your team. It also lets them communicate with the Apple developer’s website. Now you can test the app and then immediately release it on the App Store.

Most importantly, you cut down development costs. There is less time invested in the development process. You will not need a lot of developers to create an app via this IDE. Also, the apps that your team creates are compatible with all Apple devices. As soon as the development is done, you can start the testing process. XCode has a special tool for debugging that sorts every bug and instantly corrects them. You can download this XCode IDE for free from the Mac App Store. As it is a free IDE, XCode is reliable. All types of business owners can opt for this IDE. It is well-known for small/medium businesses, large enterprises and for freelancers too.

Before your app is launched, you can hold a quick preview using this IDE. It helps you see through the app without actually running the program. This follows the model-view-controller pattern which helps in designing the app according to your choice. This simple to use software yet has wonderful features. This makes XCode the best IDE for iPhone app development.

How Matellio can help you?

Matellio can help your company in every way to deliver the best development services. We make sure to bestow first-class development services by exceeding the expectations of the client. We also maintain clear transparency in our services that makes us highly reliable. Matellio is a software/mobile development hub to 150+ developers with exceptional skills. We have structured exclusive methodologies to handle projects of any scale or complexity. This helps us to deliver any kind of development service with precision. We maintain competitive service for every project and ensure to deliver before deadlines. We always stay open to opportunities and new ideas to work with.