Telegram landed on the scene in 2013 and today, almost five years later, it is everywhere and has become a model example of what a messaging app should be. Pavel Durov, the founder of Telegram, knew it from the beginning that to compete in such a fierce marketplace, he needed a product which was unheard of. He needed to create a revolution. He needed to make a secure messenger app, backed up by a skilled IT support and developer community that could meet any challenge head-on and keeps adding value to the app. And it wouldn’t be a long stretch to say that he pretty much succeded in doing what he set out to.

As of March 2018, Telegram has over 200 million monthly active users. Furthermore, Pavel expects big things in 2019, on both security and feature-list fronts. So with an already established customer base and forecasts of new features, Telegram is sure to break barriers this year. Naturally, while we can all bask in the light of all that Telegram has achieved in such a short time, some of you might be wondering- how can I make a messaging app like Telegram? Well, it’s not easy, we can tell you that much. But it is, however, very doable. And today we will see what are the necessary features you need to add in your Telegram clone app and how much it’s going to cost you.

What Makes Telegram So Special?

To make an app like Telegram, you first need to understand why exactly it is so popular. What is it they are doing that makes them stand out in the over-cluttered messenger app market? Well, let’s find out. 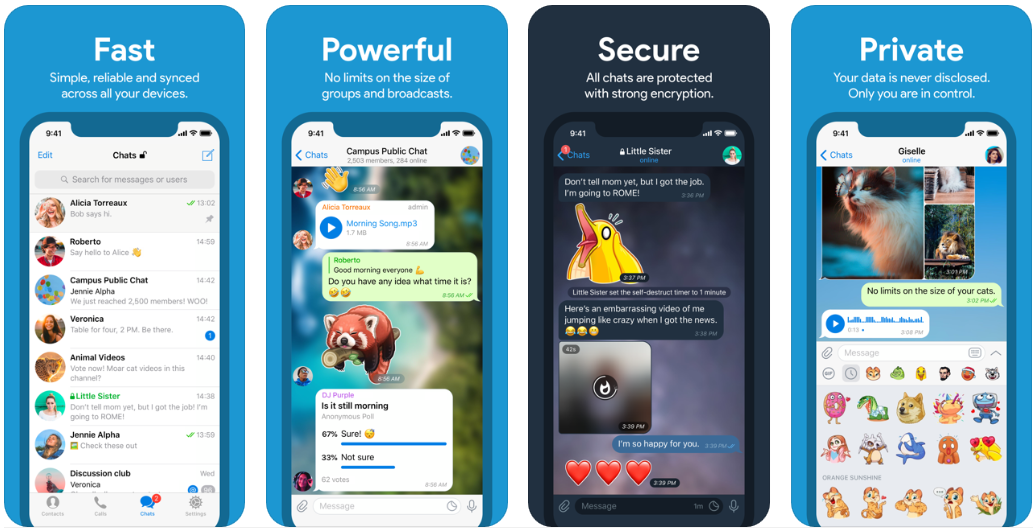 One of the major reasons why Telegram is so popular is its bulletproof security measures. In fact, Pavel Durav even offered $200,000 to anyone who could crack their security and, lucky for him, no one has been able to do it yet. So what makes Telegram so impenetrable? Well, instead of committing to just one encryption protocol, all the messages on Telegram are encrypted using its proprietary encryption protocol MTProto encryption protocol, which is a curious little mixture of 256-bit symmetric AES encryption, 2048-bit RSA encryption, and Diffie–Hellman key exchange protocols. Contrary to what Whatsapp does, that is using end-to-end encryption protocol that encrypts all messages on user devices, Telegram doesn’t protect all the chats. Instead, with its Secret Chat feature, it lets users decide which chats they want to protect and which ones they don’t. Users can also start a timer so a message is deleted automatically once it has been read by the recipient. Secret chats are not stored on any Cloud and can be continued only from the devices they were started from. You cannot forward a message from a secret chat and if you take a screenshot of the chat, then the person on the other end is notified instantly about it.

Telegram’s code is absolutely open-source which the developers love. Anyone can get their hands on this code, and take part in the on-going development process and improve the app.

Telegram also allows developers to use their API to develop their apps for free and then monetize them on app stores. However, there are some chains here. Any company with an IPO or anyone who is looking for a big round of investment can’t use Telegram’s API because according to the company, there is a conflict of beliefs between them and Telegram- data privacy is supreme.

For a long time, app developers have been trying to appeal to a worldwide user base by translating their apps in native languages. And while they have succeeded up to some extent, these developers cannot cover the entire world, simply because it’s not very profitable to have your app translated for regions where you don’t have too much user traffic. Telegram thinks differently though. It has recently added a translation platform that lets users create their own language packs. This means people from all across the globe can use this translation platform and translate Telegram into their native languages.

Telegram has often boasted that it doesn’t spend a single dime on marketing. It doesn’t approve of any type of hype-building or advertisement for their app, and quite frankly they don’t need it either. It has become a mammoth in the industry and people use it because of its crazy line of features. Professionals use it for its security. Developers are drawn toward it because of all the artistic and technological liberties that its API and open source code allow. And users, they like it because, hey, at least they care about data privacy.

But still, how do they manage to run an app like Telegram without no marketing tactics? The answer is simple, they are everywhere and they do everything. From Bot APIs to Telegram’s very own gaming platform, that allows users to develop HTML5 games that don’t require to be downloaded on to a native device, and Telegram Passport, which is a safe cloud storage space where you can upload all your legal documents, your passport, birth certificate, and whatnot and share them whenever you need them directly, Telegram is scoring homers after homers and is reeling in users and mobile app developers like no other company in the market.So if you think about it, this no marketing tactic is not as crazy as it seems. Telegram is depending on its work, expecting it to reel in the users rather than playing marketing gambits on them.

Features You To Need Consider While Developing App Like Telegram 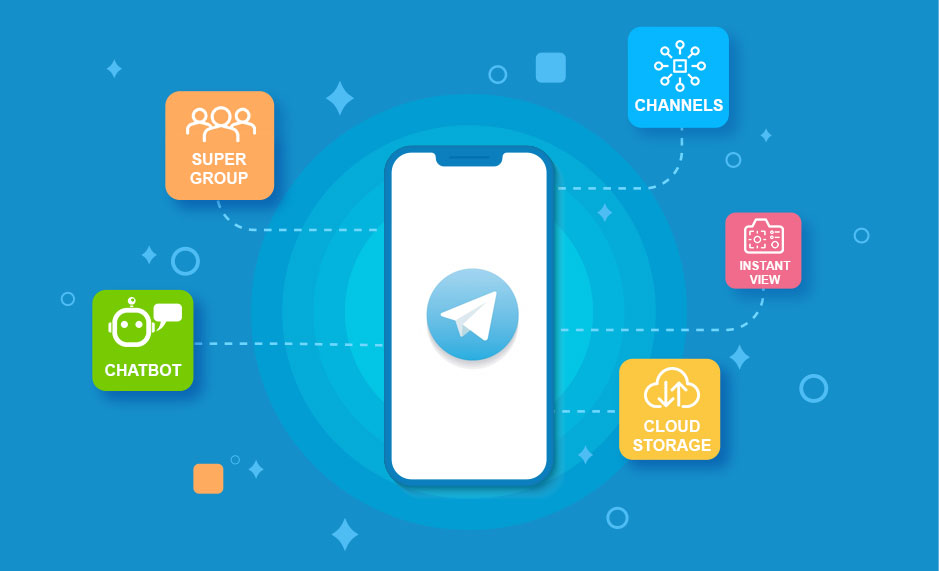 A user can convert any ordinary group on Telegram to a Super Group. By definition, super groups are like any regular groups, just with a whole lot set of powers for a group admin to exploit, starting with the ability to mark a message important. A user can also ban or report a user as a spammer and delete all the messages sent in that super group by any particular user.Also, a group admin can limit the type of content a group member can post in the group chat and also turn the Super Group into a one-way broadcast channel. Furthermore, an ordinary group can now have up to 200,000 users in it.

Channels are also an interesting feature you should consider adding to your app. Telegram channels allow you to share a message with non-users by posting links. Also, it allows users to send a message without notification. This feature is especially useful if you want to send a message late at night, but its nothing too critical. So by sending a silent message, you won’t be disturbing your users and they will read it the next time they visit your channel.

To make browsing the internet a little less tedious, Telegram has a feature called Instant View. what is does is, it lets a user share a link for a website or a blog which, when tapped upon, opens in the Telegram app itself. This means, the time it would have taken for a separate web browser to open that link has been slashed, making web browsing a lot quicker. Telegram allows complex web designs now, to accommodate a wide array of websites.

Telegram has one of the most cutting edge chatbot systems in the market right now, which is understandable since they were among the first few companies to have their own chatbots. Chatbots on Telegram can perform a wide array of functions from doing your finances to reading the news to you.

Telegram is a cloud-based messenger, and it exploits this fact really smartly. First of all, it doesn’t restrain its users with a limited cloud storage memory. Telegram allows its users as much cloud storage as they want. For users who keep switching between devices, like mobile, tablet, and desktop, it is possible for them to sync their chats across all devices. How does it help? Say you were typing a message on your phone, but couldn’t finish it and send it away before you switched your devices. So now, when you will find your way back to the same text box in the new device, you will find your unfinished message there, waiting to be finished and sent along.

Telegram is on its way to becoming one of the most prominent messenger apps in the market. And pretty soon, people are going to realize that what they are doing is giving priority to data privacy and they believe in letting their work speak for themselves, rather than throwing a misleading flashy advertisement in their faces. So naturally, demand for more such apps is going to spike and now is the best time to start developing your very own Telegram clone app. Contact Matellio and request a quote today!