In today’s fast paced world, everything needs to be mobile. Most of us work around 9 hours a day and then spend a lot of time travelling and that is the reason why the mobile application development industry is making all our chores mobile. From banking to streaming our favourite shows, thanks to smartphone app technology, we can do all these things while on the go. It is no longer possible for us to be in front of our T.V. at the exact time when the show we want to watch is about to air. Furthermore, we have no time to sit leisurely in front of T.V. anyways. So the solution is that we get our daily fix of entertainment in whatever small packets of free time that we get during our days and that is where video streaming apps come in.

Statista reports that by the end of 2019, Netflix had 167.1 million paid users globally out of which, 61 million were in the U.S.A. and the remaining 106.1 million were from other countries. This number is enough to hint where the entertainment industry  is heading. More and more people are leaning towards streaming services and as a result, many big names in the entertainment industry have launched their streaming services in the past couple of years as well. 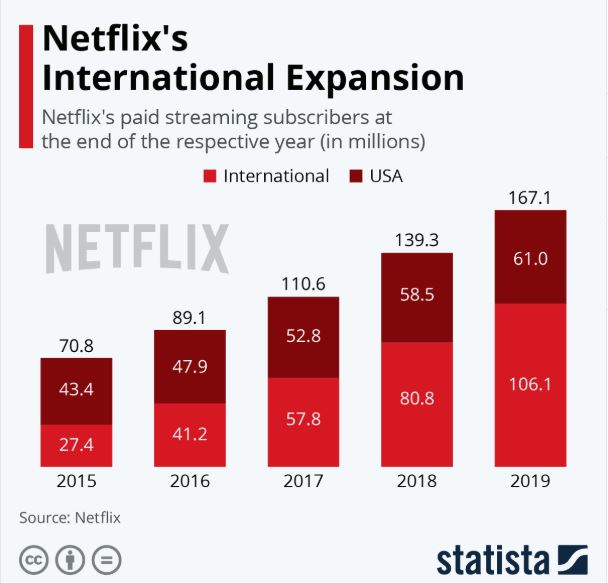 Hulu is a joint venture between The Walt Disney Company (30% stakes), 21st Century Fox (30% stakes), Comcast(30% stakes), and AT&T (10% stakes). It was founded on the 29th of October 2007. Hulu is primarily an online service for television show streaming and is known for being faster than its competitors in the market. 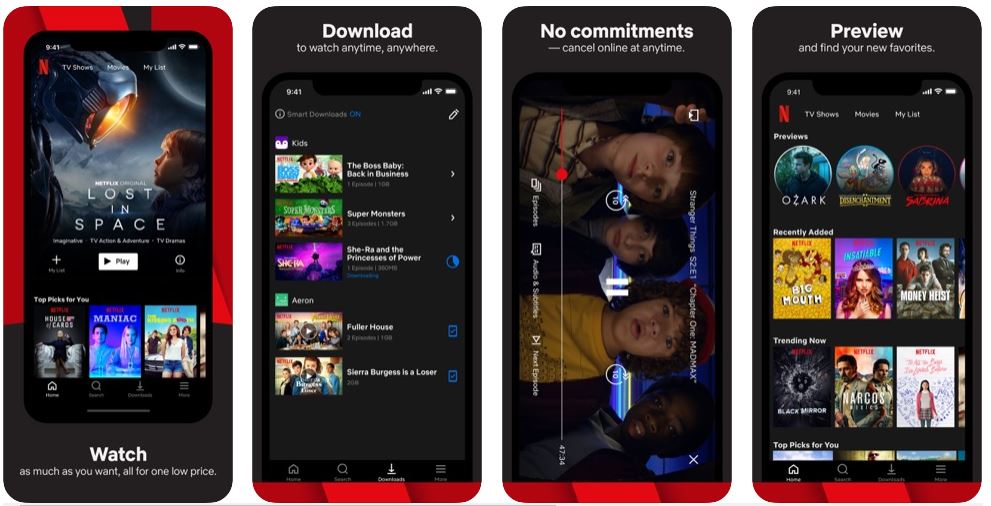 Netflix is the top video streaming service in the market. It was released on 29 August 1997 by Reed Hastings and Marc Randolph. It is known for its critically acclaimed content which speaks to the audience of multiple age groups. It has a huge collection of television shows and movies, both licensed and self-made. Netflix further made itself more relevant in 2019 by making Oscar and Golden Globe awards nominee material like Marriage Story, the Irishmen, and Two Popes. Furthermore, 6 Underground, a netflix original movie directed by Michael Bay and starring Ryan Reynolds was streamed 83 million times. And Witcher, starring Henry Cavill, a fantasy drama series, often called the new Game of Thrones, was streamed 76 million times in the four weeks that it has been up on the streaming service. 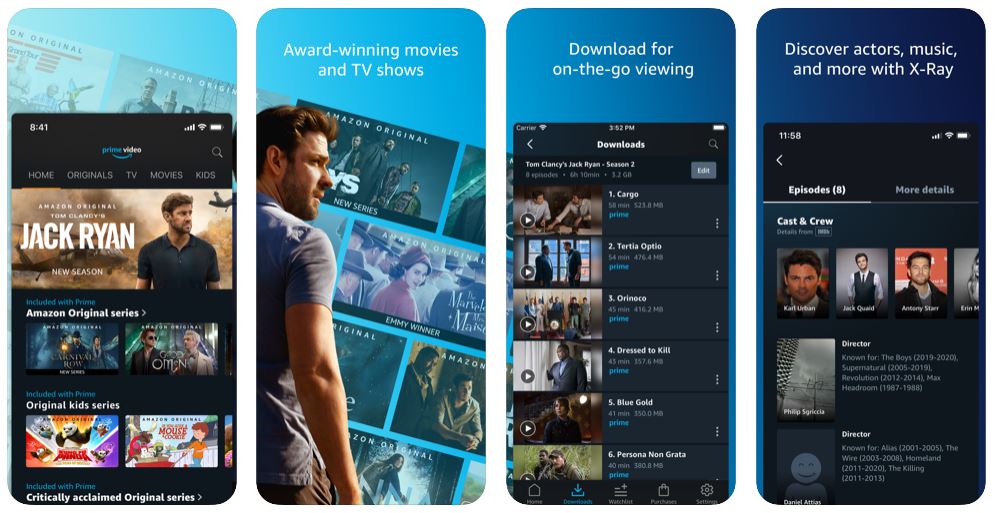 Amazon Prime Video is the eCommerce giant’s online video subscription offering. With a slew of popular shows and movies, Amazon Prime is strengthening its hold in the market. Among some of its most popular shows is Fleabag, which managed to bag a lot of awards this year. And with Star Trek: Picard’s positive reviews, the streaming is sure to get even more popular. 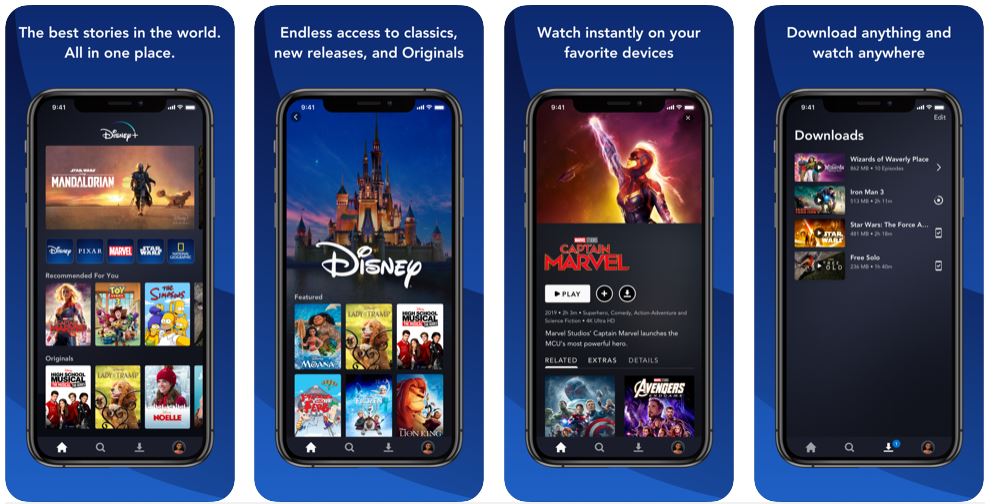 Relatively new in the market, Disney Plus is helmed by Ricky Strauss. While it is new, it is already immensely popular. Disney is the studio behind Star Wars, which alone is a force to be reckoned with. On top all the classic disney shows that you used to enjoy on Disney channel as a kid and all the new content it is creating to target a younger demographic, using those old and classic characters. A classic example of this would be Disney’s Mandelorian, which is a spin-off series of the Star Wars franchise and held the record of the most popular show with 115 million demand expression till Witcher swooped in and dethroned it with 127 million demand expressions.

Apple TV Plus is, as the name itself suggests, the tech giant’s streaming service which was released around the same time Disney Plus was last year and it is already making waves. Though it may not be as popular as Disney or Netflix at the moment, the company is putting in a lot of money to acquire talents like Jennifer Aniston, who now stars in The Morning Show which got three Golden Globe nominations and Jennifer even won the SAG award for the best female actor in a drama series for her role.

What are the Top Benefits of Video Streaming Apps?

The greatest advantage that these video streaming apps have to offer is the ease of being mobile. We no longer need to remain cemented on one place to watch a movie or an episode or in one go for that matter. We can watch them while we are travelling on a bus, during lunch breaks at work or in bed, and we don’t have to watch all of them at once, we can do so in parts, under blankets.

Social media has become like second nature to us. We share everything that happens with us there. We also like to share with our friends what song we are listening to or what movie we are watching or what book we are currently reading. So it is only natural that we would want to share our video streaming service exploits there as well. And most of these streaming services allow you to share your current watch on your social media accounts.

Must Have Features in Video Streaming App

Now before you start developing a video streaming app, you need to conduct thorough market research. You need to assess the market and pick your target users. One more thing that you will need to do is research top streaming apps very thoroughly. See what features they have, and out of them, which ones are absolutely essential. Then look for features in their apps that you can improve upon. A crucial phase of market research is customer interviews. When you conduct these interviews, customers tell you their thoughts on the current apps, and how they could be better or the features they wish it had. You can use this information and introduce novelty features to attract more customers. Of course, you won’t be able to put in every feature in the beginning. So we have created a list of some of the very basic features your video streaming service must have in the beginning.

The first thing you need to do is come up with enticing subscription plans for your service. In the beginning, you need to start off cheap to get more customers. So plan your subscription packages according to that. Furthermore, you will need a registration page. This page will take a  user’s information and his choice of a subscription plan. Take Netflix for instance. It has three subscription plans- basic, standard, and premium. You can see what each package has to offer in the below image.

Next thing you need to have is a secure and well-trusted payment gateway. This might be the most vulnerable and crucial portion of your app. Whenever there is money involved, people get extra jumpy. So it is a good idea to use a popular payment gateway with a good reputation.  Also, you need to provide various methods of payment as well. Don’t be rigid, the whole idea of video streaming services is to be flexible. So like most streaming services, you need to allow your customers to pay with their credit/debit cards or their eWallets.

No one likes to wait. So when your users need to wait for like a minute or two for you to index your search, they get bummed out. This way, you lose their faith and cease to be in their good graces. So you need to figure out a way to make browsing in your app fast. Furthermore, you need to sort your browse section, too. Divide your content according to its genre and then put them in separate tabs. Also, allow your customers to not only search with the name of a movie or a show, but with the name of people involved with it, like actors, directors, etc.

In this phase, you need to find a middle ground between visual appeal and ease of use. UI and UX are major reasons why an app succeeds or fails in the market. This point is not related to video streaming services only; any app which is too hard to use or doesn’t have a seamless UI  with an eye-catching design, fails to impress the customers. When we talk about video streaming services, we need to keep in mind that we will be dealing with a lot of browsing. Furthermore, we will be giving a lot of data to the users. So a bulky UI will cost you time since it will take longer to load and as result, your app will be slow. At the same time, if your app is not pretty enough, then also it will fail to stand out in the market.  So as we said before, you need to find a middle ground between the two aspects.

You will need to provide a basic settings menu to the user. From here they will be able to change their username or password or their subscription plan. Here they will also be able to tweak a few other details about the app itself or set their preferences.

Give your users a rustic profile page, at least. Here they will be able to change their avatar, screen name, email address, etc.

The greatest threat on these video streaming services is theft of content. So to stop people from recording what they are playing on their screen and then leaking it on the internet, you need to block any form of screen capturing. This way you preserve the copyrighted content.

Most apps these days have social media integration. They let you log in using your social media accounts and share your current activities there. Video streaming services need this feature so that their users can share their current watch with their friends on various social media platforms.

Not every user can read or understand English. So you need to make arrangements that the text in your app is in various languages.

They are a great way for you to interact with your customers. You can tell them about any new series you might be launching. You can tell them if there are some changes in your terms and conditions or inform them if you’ve released an update for the app. Push notifications are a great marketing tool and a must-have for your app.

You can allow users to download the content and save it on their devices. This way, they will be able to watch their serial or movie even when they don’t have access to the internet.

Now you know all the features you need to add, you have a game plan, and you’re excited. But just to be on the safe side, ponder over following points:

Don’t forget to Add Your Own Touch

In an industry with so many players, you need to do all you can do to stand out. You need to be original and smart with your app design and feature-list. So you need to bring in some unique features that will make your app stand out from the rest.

The era of the living room is dead. The times when the whole family used to get together and watch a string of their favorite prime time shows, is gone. Now, we all have handheld devices, and we all subscribe to one video streaming service or another. These video streaming apps are the modern way of entertainment. In the past few years, apps like Netflix, Hulu and Amazon Prime Video have successfully carved an identity for themselves in the entertainment business. And with the type of quality content Apple TV Plus and Disney Plust are putting out, they are sure to catch up in popularity too. Every month, more and more people subscribe to one of these services and watch their favorite shows and movies, anywhere they like. And by the way things are going for these video streaming services, they are sure to be the future of entertainment. So right now, is the best time for you to get in on the action.