Mobile apps seem to be simply a part of our daily life. From contact apps (WhatsApp) to shipping food(Zomato), to commuting(Uber, grab taxi), and e-commerce apps like (Amazon), by using such applications, people’s daily lives in rural and urban areas have been changed. In today’s extraordinarily competitive and evolutionary mobile app development world, businesses and organizations would not risk losing their existence on any platform, whether it’s Google Play or Apple App Store.

According to Statista, the total number of mobile app downloads in the year 2019 was 204 billion. And according to bankmycell.com, over 45% of the world’s population owns a mobile phone, which means over 3.5 billion users.

Throughout the first quarter of 2020, android users could select from 2.56 million apps and make Google Play the app store with the largest number of mobile apps available. Although Apple’s App Store, with around 1.85 million IOS apps available, was the second-highest.

Considering the above facts, by transitioning to the new mobile app development systems, many large companies have either modified or are in the process of improving their product development process. On both platforms, Android and IOS, nobody likes to lose their presence. And that’s where the need for the development of cross-platform mobile apps has arisen.

This blog will be closely understanding and comparing the top 5 cross-platform apps development framework to look for in 2020. But before moving towards the topic, let’s explore some basics first.

What is a Cross-Platform App Development?

Cross-Platform is a type of program that can run on different platforms like Android, IOS, Windows, and Blackberry, etc. Across each forum, the apps developed using this model do not need separate coding. But coding once will build the basis of the application to operate effectively and efficiently on all platforms. It is among the most common techniques in today’s software development domain, on which just about the entire top mobile app development firms and businesses vow upon.

The cross-platform app development was restricted to creating essential mobile apps and games a few years ago. Over TimeTime, new technologies have made cross-platform production more adaptable, efficient, and scalable than ever before.

Though, Cross-platform app development still faces challenges such as:

Code Reusability – Cross-platform app development encourages the reusability of code. Programmers can only code once and reuse the same source code on many other platforms to run the applications. This latter minimizes repetitive activities and, in effect, ended up saving operating costs.

Better Development Time – Having a single source code for different platforms helps to eliminate over 60% to 80% of development efforts. This allows you to develop rich and responsive mobile applications at much less cost in much less TimeTime.

Easy to maintain and deploy – As there’s only one built-all app that runs across all platforms, it is simpler to manage and distribute code or modifications. It’s possible to synchronize updates easily over all platforms and computers, saving TimeTime and money. Also, it should be patched once if vulnerability or bug is found in the standard source code. Developers will, therefore, save a great deal of TimeTime and resources.

Fast Time-to-Market – As we stated above, the philosophy followed when developing cross-platform app development is Write Once, Run Everywhere. It enables app developers with swift deployment and decreases Time-to-Market. It’s often simple for programmers to make minor adjustments to a single code if you need to modify or customize the app.

As of now, we discussed what cross-platform, their challenges, and benefits now. Let’s move to the main bit.

There are many cross-platform app frameworks to choose from, each with its collection of benefits and drawbacks. Conversely, we’ve selected the most efficient and highest-performing frameworks currently available as per the following pattern. So have a look.

React Native – As we understand it, React native was among the most widely known cross-platform development frameworks for apps that have ever come into existence. React native incorporates the advantages of JS and React JS and gives developers the benefit of writing components in Objective C, Swift, or JAVA. While using the native components and libraries in the react-native cross-platform apps, developers could perform massive operations like editing images, graphics rendering, or other operations that aren’t part of the framework APIs. According to Stack Overflow, React native has secured the place in the category of dreaded frameworks for the first time.

Hot Reload – This is among the most popular features of this framework, allowing the developer to see User Interface adjustments in real-time. They modify the code, making it simpler and faster to build.

Easy Migration – If you have an app designed via React, it will be productive and simpler to react native developers to move it to mobile design. While using respond native and saves a lot of work and TimeTime that would otherwise go to waste.

Code Reusability – When developing several applications, a lot of code can be reused. This saves both the cost of development and TimeTime incurred on development. It is possible to reuse almost 80% of the code, allowing React Native valid to Write Once Use Anywhere philosophy.

Has the best excellent rendering capabilities and comes with Helper tools to convert old React Native scripts into new ones.

Apps made with React native

Xamarin – Another most popular framework backed by one of the biggest tech companies Microsoft. Xamarin is popularly known for using a single technology stack and primarily uses C# and .net. It is a simplified framework used for creating an application for Android, IOS, and Windows via C# and .Net rather than JS or HTML. It enables developers to use 90% of the code to develop an application for three separate platforms. The abilities of Xamarin to link every API makes it possible to use every existing native component. Here are the characteristics of Xamarin that illustrate why it’s among the best cross-platform options for mobile app development.

Apps made with Xamarin

Flutter – Flutter is an open-source and free cross-platform framework for developing native interfaces for both IOS and Android platforms. Flutter is object-oriented and mainly operates on the Dart language while extending support for other languages such as C, Swift, JAVA, and many more. Flutter comes with a colossal library, widgets, and a set of reusable UI elements that can be modified to match your requirements. According to the stack overflow, flutter is the top 3 most loved frameworks. Flutter provides an application that runs with consistency and versatility, quickly and reliably on multiple platforms. Here are some of the incredible characteristics that make flutter amongst developers an appropriate cross-platform framework.

Multi-version support – Flutter supports various versions of both Google and IOS, and on multiple OS versions, you can make sure the software looks and functions the same. With fewer users upgrading to new versions, this feature will help save a lot of testing and upgrading costs for different OS versions.

Web support – Flutter is also prominent in the web app market, together with an app that operates on all popular mobile operating systems, rendering it a really-in-one solution for business growth online.

Promotes portable GPU, which renders UI power, enables it to work with the latest interfaces.

Flutter comes with full of widgets in Google’s Material Design and Cupertino pack of Apple’s style.

Best for MVP development, rather than spending money and TimeTime on two separate apps, you can quickly build a flutter mobile app that looks native on both IOS and Android platforms.

Apps made with flutter

Ionic – Centered on AngularJS, ionic is among the most impressive and successful cross-platform app frameworks. It enables developers to access native platform controllers using several languages like JS, HTML5, CSS, and Cordova wrappers. Ionic helps developers create a UI that is impeccably innovative and incorporates user-friendly features into the app. Apps built with this framework are thoroughly engaging and native-like, making ionic a great PWA creation choice.

Apps made with ionic

Native Script – To help developers build cross-platform applications using single source code, Native Script uses JavaScript, Angular, or typescript, capable of running on both Android and IOS platforms. This open-source framework or architecture features are infinite, with one of all cross-platform frameworks providing the quickest model for application development capabilities. Native Script is intended to make mobile app development simpler for all those who have previously worked in Angular, JavaScript, or TypeScript. Native Script also includes all native APIs, allowing developers the opportunity to reuse existing plug-ins into projects directly from NPM.

Single Codebase – Kudos to its Native API call functionality that is empowered either by Angular, JS, and TypeScript. It is one of the few cross-platform application development frameworks that will enable you to reuse the near-total source code for both IOS and Android.

Plug-in Support – For both platforms, NativeScript offers tons of plug-ins for all-over support. It provides them for API integrations and User Interface components, whereas JS could be used to call the new app to the existing traditional native solutions.

Due to the open-source platform, Native Script provides free licensing to programmers via Apache2.

Native Script makes excellent, open, and platform-native User Interfaces, even without WebViews. It is only necessary for developers to describe once and then let the Native Script migrate to run anywhere. The User Interface can also be customized to unique devices and displays.

Apps made with Native Script 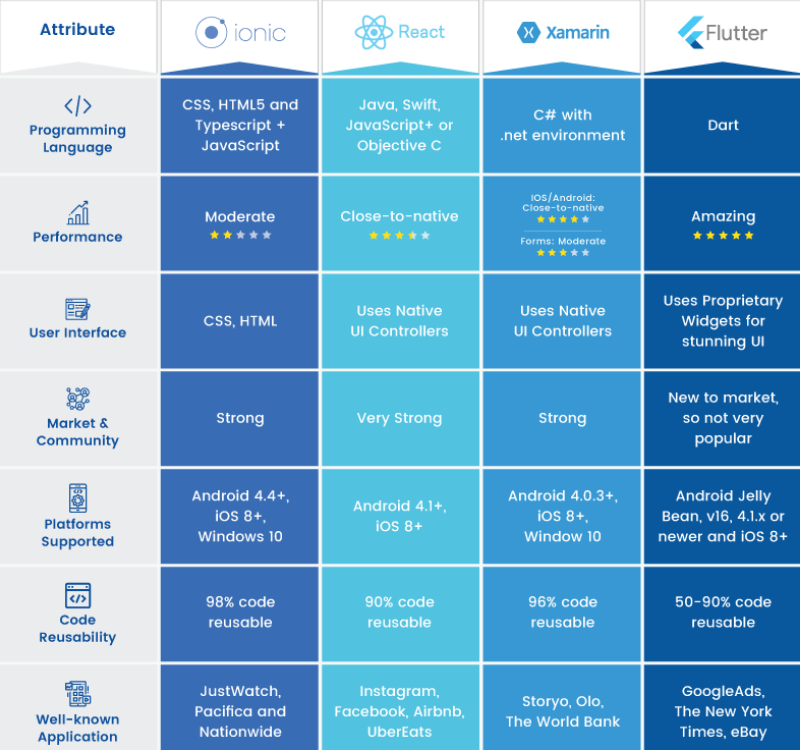 Our professional app developers at Matellio aim to deliver the perfect, scalable, and appropriate mobile app solutions for your business niche. Instant market penetration and minimal development cost are the key reasons our clients and customers chose Cross-platform application development.