Why You Should Start With the MVP for Mobile App Development?

How do you pursue mobile app development? Say, you need to launch an eCommerce mobile app like Amazon. You brainstorm a superb idea with all the features you need in it. There are product categories. Users can add the ones they want to buy in the cart, and then they can check out with faster payment options. Next, you hire an outstanding mobile app development company that has a track record of delivering great products.

The team finally begins the product development lifecycle and meanwhile, you keep adding impressive features to it. When you finally launch the app, it falls flat. You find it hard to keep the users hooked up. And eventually, you run into a huge loss.

Not a great story for any business owner. Are you scared too? Don’t be.

Lean startup emphasizes on following a scientific approach to creating and managing the startups followed by delivering customers with the product quickly. It works on the principle of the build-measure-learn feedback loop.

It aims to offer the users with a product MVP and then pursue to shape the product which is loved by users. Let’s explore what does an MVP mean and how will it benefit you.

What is an MVP?

In the easiest words, MVP is a mobile app or a web app that has just the essential features to test it among the target audience. Most of the startups venturing in mobile app development consider it as an aid to testing the app’s idea in real-time. It garners significant help from the users, helping the app owners to make the changes as they transform MVP into a full-fledged mobile app.

It aims to serve the app owners to save huge on the investments by enabling them to study the target audience without additional functionalities.

What are The Business Benefits of MVP?

You cannot just end up gaining millions of downloads on the App Stores. It takes time to reach out to the target users and finally convince them to choose your mobile app over alternatives. MVP helps a lot in this respect by additionally saving your time and money. But that’s not just the limit of MVP benefits. Here we are highlighting some of them. 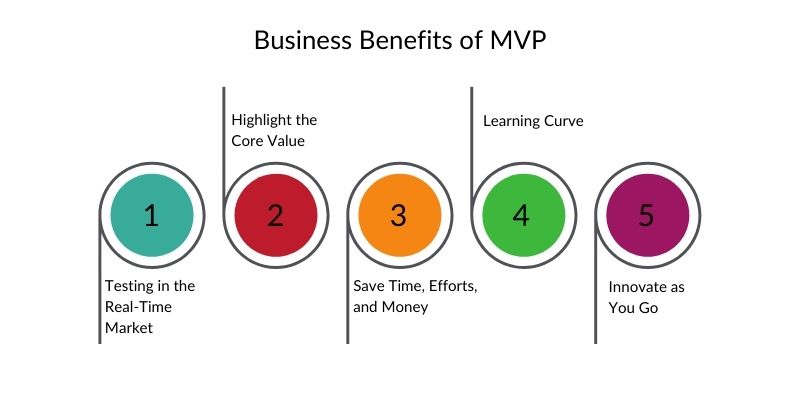 1. Testing in the Real-Time Market

You can implement the best of the software testing methods and yet fail the test of time. What could be the most prominent reason? The lack of interest in the target market to use your mobile app. Now, the reasons can be many. Your app me not be up to the mark in terms of performance. You may not have an idea that strikes a chord with the user. Or, it can be something else. An MVP launch will help you analyze these factors and make sure that the target audience loves your product.

Unlike mobile app development where you have multiple aspects to be handled, MVP focusses on the core value. Just because it has only the essential features. Thus, it helps you and the development team to ensure that the heart of your idea is not doomed in the features.

3. Save Time, Efforts, and Money

MVP is a full-fledged product in itself. Businesses can launch it just as they would launch a full-fledged mobile app. It reduces the company’s efforts, the time required, and investments while enabling them to launch a user-friendly product with basic features. MVPs also help them gain in-depth insights and ensure success in the market.

As MVP gets you great information on the market, you know how will your app deliver even before you release it. Additionally, it will give you an idea on real user experience by adding value to your research. Thus, it is a beneficial addition to the learning curve of the team by garnering feedback and reviews.

5. Innovate as You Go

Consumer feedback is an essential aspect of the innovation cycle. MVP’s enables you to get input from the target users and assist you in coming up with features accordingly. While you can also implement the same following traditional approach to mobile app development, it really affects the time to market and associated cost. On the other hand, MVP gets you benefits of the agile approach.

Successful Apps that Started as MVP

MVPs help businesses to understand market requirements without even having to develop an exhaustive product. Here are five successful ideas that began with an MVP:

Topping our list of successful MVPs is Facebook. It may not have started as an MVP fairytale, but indeed ended up there. Launched in January 2004, it was earlier recognized as Thefacebook with the basic registration. Users used it to browse through the online directory backed by the college networks for Harvard Students.

This was followed by immense popularity that finally shaped it into what we see it now, the undisputed ruler of social networking.

Known initially as twttr, Twitter was popularly known as the 140-character social network that took hashtags to another level of fame. Originally, it was designed for the internal users at Odeo as a conversation medium for the employees to exchange messages.

Witnessing its market potential, Twttr then transformed into Twitter on July 15, 2006.

Anyone who seeks secure cloud data storage must have heard about Dropbox. MVP majorly focusses on gaining user’s interest before finally launching the product for them. And this precisely whatDropbox did.

Thus, the Dropbox co-founder and CEO Drew Houston prepared a three-minute video. This video played to the right audience explaining to them how finally Dropbox will work. The users saw it and loaded with valuable feedbacks suggesting the creators what they would love to have and what are pain points. Collecting as many as 70,000 email addresses in a single day, Dropbox creators were finally given a go from the users, and thus, the product finally came up the way it should.

Just like others on the list, Groupon was not born successful and is a result of constant changes based on users. It started as The Point which flopped terribly but gave more profound market insights to its developers.

They, then, took to WordPress and posted daily deals as a blog post. It eventually started gaining popularity and then developers finally shaped it into a mix of web and mobile interface constantly innovating as they go.

Airbnb is a one-stop shop that offers users with a peer-to-peer online marketplace to discover renting prospects. This includes everything from single rooms to an apartment, suite, yacht, castle, or anything that you can think of. Aiming to deliver incredible travel experience, Airbnb boasts of offering local experiences that are highly driven by native experts. It homes over 4 million vacation home rentals across 191+ countries.

But this idea was initially tested as accommodation provider for the travelers. Once the market built up, the owners expanded organically to shape it as we use it now finally.

How Can You Make MVP Development Effective?

MVP development aims to build a subtle balance between features and value. Simply put, MVP is designed ensuring that it contains all the elements that include Unique Selling Proposition. The key focus area here is to make the product suitable for the users.

Get Started with MVP of Your Mobile App

MVP is an excellent addition to the mobile app development cycle. In addition to saving your time and efforts, it also helps you invest wisely by testing your idea in real-time. Not only this, but it also enables you to win user’s trust by appealing them using user-friendly features. In a nutshell, it helps you get the most valuable product up and running with the help of minimum viable product.

Want to hear more, fill out the requirements here and get started today with free estimation.

How to Develop GPS Apps for Tracking Devices?

How to Develop a Social News App Like Flipboard?

Give us a call or fill in the form below and we will contact you. We endeavor to answer all inquiries within 24 hours on business days.
+1-408-560-1910
info@matellio.com
Need Help with Your Project?

Connect with our experts over a free consultation call and get the best services tailored to your business requirements.