Over the last couple of years, Blockchain has been one of the most popular and essential technologies in the market. From the banking sector to the healthcare sector to the mobile app industry, everyone is going crazy over it. And as it slowly sophisticates, we see more and more opportunities arise prime reason being, Blockchain is what the world needs right now. From high-end software developers to multi-billion dollar worth companies, they are all starting to see what the Blockchain technology has to offer and are focusing more and more resources in adopting it in their infrastructures. Furthermore, not only can Blockchain hold its own in a pool of new technologies, but can work to enhance their reach as well. IoT, AI, AR, Machine Learning, Android and iOS app, they all can benefit from Blockchain.

So today, we will take a brief tour in the exciting realm of Blockchain and learn, what it is and how it works. And in the end, we will take some time to know more about some of the vital consensus process and know how they work.

So let’s get started!

A Brief History of Blockchain
Blockchain was not introduced to the world as a standalone technology. But instead, it was an integral portion of an entirely different technology and later on, found its way into the market on its own. In 2009, Satoshi Nakamoto- the unknown creator of Bitcoin created the world’s first ever, peer-to-peer money transfer system.

He envisioned Bitcoin to be free of any sort of bureaucracy, and so using the Blockchain technology, he created a decentralized electronic currency which had no central authority figure. It shook the financial world to its roots; never before a currency had flowed directly between two involved parties, without the intervention of a third governing party.

Ever since its inception, many Cryptocurrencies like Bitcoin have emerged and are slowly starting to surpass it. Now, the reason why Bitcoin made such a big splash in the world was that it was decentralized, and this was something no one had ever been able to do before. But Nakamoto and his team did it, and it shouldn’t come as a surprise to anyone that the way they did it, actually became more prominent than Bitcoin itself.

Over the years, as the novelty of Bitcoin wore off, Blockchain is continually getting more and more popular, and for valid reasons too, as we will discuss later on.

What is Blockchain?
A blockchain is basically a growing list of data records which are referred to as Blocks, and are linked to each other using advanced cryptographic schemes.  Each block carries a cryptographic hash of the previous block, a timestamp, and a block of data. Because of its design, a blockchain is immune to data modifications. 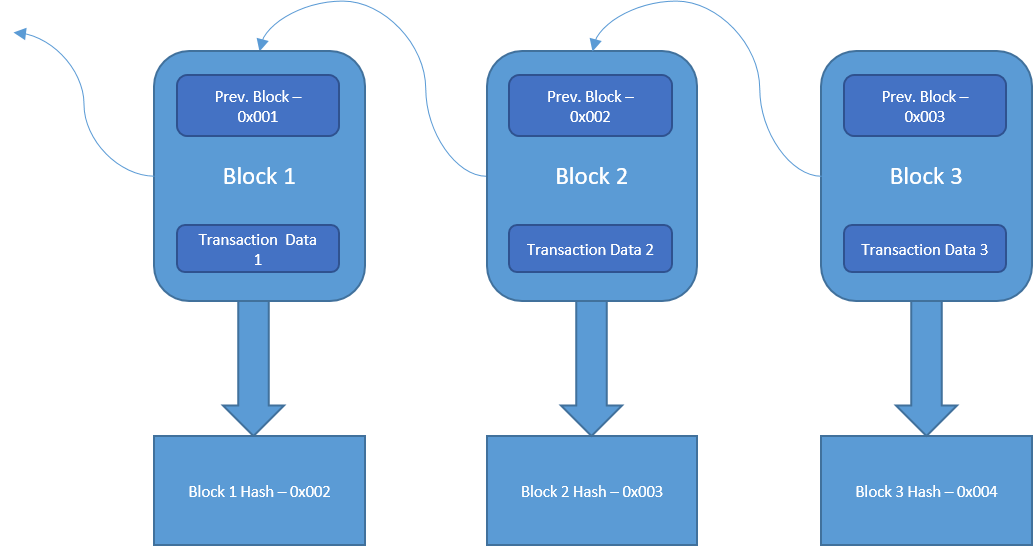 A Blockchain network is unsupervised; i.e., there is no third party governing it, it just contains Peer nodes working on the same set of data(known as a Distribute Ledger) with mutual consensus.

Some crucial definitions related to a Blockchain network
Before we move on to learn the process of operation behind blockchain, we need to know about a couple of terms which are frequently used in blockchain-lingo.

Miners
To understand the function of miners, you need to first understand what mining is. Simply put, mining is the process of adding new blocks of data in a blockchain. And those who are responsible for that, the peer-nodes involved in the network, are called miners. Miners validate a new block of data and record it on the global ledger(another term for Blockchain). How they do it, we will learn later on.

Transactions
A transaction is a term you will often hear when someone is talking about cryptocurrencies. It is basically a contract between two parties involved in the exchange of the digital currency. A typical transaction is equivalent to this sentence: A promises to pay X amount of money to B. In a cryptocurrency blockchain, these transactions are the data which goes in each block.

Validation
Validation is the process of announcing to the network that a particular transaction is legal. For this, users of a blockchain all across the world publish their transactions and miners gather them and try to put them in new blocks of data, or validate them, using various processes, which we will learn about in some time.

Consensus
Since there is no governing party involved in a blockchain network, it falls on the peer-nodes to make decisions about a few crucial matters. Now how do they do it? Because every node in the network is anonymous, how can one node trust others? This happens through consensus algorithms. Now a network expects that only a certain number of nodes will respond to a consensus request. So the decision is based on the result that has been submitted by at least 51% of the nodes who responded. 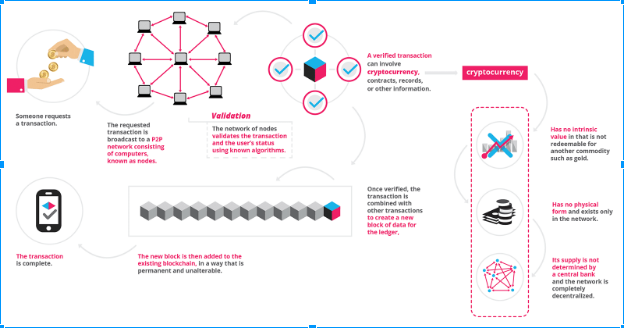 All of it starts from a transaction request or a new data entry from a blockchain user. As soon as this new piece of data comes to the network, miners start competing with each other to validate that piece of data. They try to solve a complex math problem based on a Hash algorithm. This math problem is extremely hard to solve and takes up a lot of the mining node’s processing power, and its result is called Proof-of-Work. The miner who solves the problem the quickest is able to add this new block of data in the blockchain and validate it. For his effort, that miner is provided with a reward (In the case of bitcoin, he or she gets some bitcoins for every transaction he or she validates.)

This particular process is what makes blockchain so secure and immune to changes. Because if a malicious node tampers with the data in any of the blocks, then the Hash will be changed. And since all those who are involved in the network have the recent copy of the entire ledger, they will very well be able to detect the exposure and mutation of the data in the block.

This is the basic skeleton of the entire process, there are some smaller processes, like creating candidate nodes and waiting transactions, which we will cover in other articles.