2020, a year full of uncertainties has made us adopt a new lifestyle. People are advised to maintain social distancing all across the globe. These situations have persuaded the majority of companies to take their work online. But, this situation has given rise to one issue- Co-workers face distraction in their work when they can’t see one another. Here, at this point the concept of a Video Conferencing Application steps in.

If there is some Video chat app which has risen the ladder of fame in the last 50 days, it is Zoom Meetings.

What is Zoom App?

Zoom Meetings is a video conferencing application owned by the company named Zoom. The platform allows a company to conduct in-house meetings remotely. It provides HD audio and video calls that can support around 1000 participants in a single session.

Zoom app is not only confined to corporate scenarios, but is even used in the personal space. People avail the application to interact with their friends and families. The channel is also utilized by educators for teaching through online classes. This rising demand for online meetings and classes has prompted many businesses and entrepreneurs to develop an app like Zoom.

In order to address the same, we today are going to explore every nook and corner of the development of an app similar to Zoom.

Is it wise to develop an App similar to Zoom in this highly competitive environment?

The point is any business idea is flooded with dreamers, and developing a unique application is rarest avenue. This means, broadly, you are left with two choices- Wait for an hypothetical idea or invest in the solution that has already been implemented with a touch of your individuality!

But, the question states the same- how to launch a video chatting app where already big shots like Adobe, Microsoft,  Cisco exist?

The same question had been asked to CEO and Founder of Zoom, Eric Yuan by Forbes, to which he replied,

“It is extremely crowded, but the potential is huge. If our product is better than any others, we can survive.”

His actions had already proven his words. When the other giants were on high, he simply popped out and touched the sky. And, it’s no mystery that the tech giants with most usability applications tend to be highly successful. Some of the big giants like Yahoo who seemed invincible at some point, are now the names of the past. In the real world, the formula stays same for everything-

Survival of the Fittest

And today, Matellio is presenting the capsule to the top- “How to create an App like Zoom Meeting?”

Features to be integrated in a Video Conferencing App like Zoom 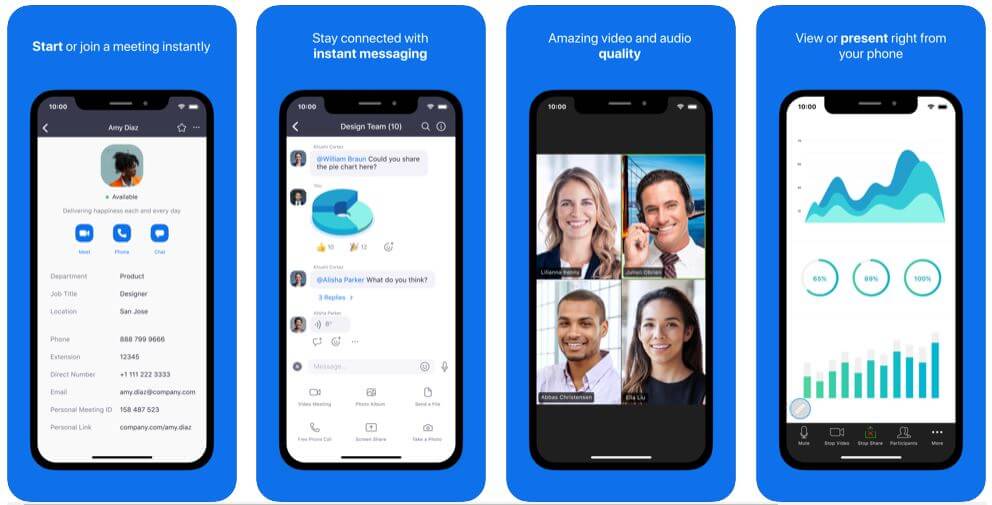 The very first thing we recommend is registration, though the step is not present in the Zoom app.  To have an engaging user experience, integrate this feature either through third-party apps like Google, Facebook or a simple sign-up form. The next step would be profile management. Ask users for names, mail ids, profile pic (optional), occupation, and much more.

No chatting application is possible without a contact. Certain elements need to be considered while crafting this feature. The first would be a search engine. Users should be able to locate other people, using both nicknames and real names. Another element is the integration with the phonebook. The users should be able to contact their phone friends through the app, but make sure you have seek permission to access the users’ phonebook. Google Contacts API is the best way of importing existing contacts into the solution.

This feature is one of the chief ingredients in a Video Conferencing application. In addition to video calls, the app should facilitate voice calls as well. This way, users can keep in touch with the people abroad as foreign calls are quite expensive. Concerning video calls, they should abide by HD quality standards, and audios must be clear and loud. Although the quality is dependent mostly on the bandwidth, and you can’t do much. But  it’s still your responsibility to optimize the real-time connections with the best of your efforts.

At times, you don’t want to make a call or the same is not feasible due to a poor network. In such cases, the text chat comes handy. For integrating a texting feature in a video conferencing app, you can avail Twilio. The SDK possesses all the basic instances required for chatting. The cross-platform SDK reduces the development time of  the app.

One-to-one calls are fine, but not sufficient for organizational meetings. Depending on the type of audience- design a prototype. If your app is aiming corporate- target no less than 50 users. If the audience is having fun conversations with friends and family, then provide support of 10 people per call. Remember, the scalability of application is directly proportional to cost of development.

No third person should be able to read this message. End-to-End encryption ensures that all the conversations are confidential. Protocols like HMAC-SHA256 and AES-256 keep the conversations secure. These protocols split the data into 256 bits long blocks- these blocks are then encrypted, transmitted to the destination, and then finally decrypted at the recipient’s side.

A must-have in any video conferencing app. The features help in illustrating the content of your screen and share it to others. It is especially very useful for tutorials, presentations, and even watching movies. It can be used both in a day-to-day conversation and a business conference. This feature can be implemented by using WebRTC protocol.

During a virtual meet  especially when there are too many members, the Virtual-hand raising helps the users to convey their desire to speak by signalling the host. It is accomplished with a virtual emoji, usually designed like a raising hand. Don’t forget to integrate this feature in your app as it prevents multiple users from speaking at a time, and hence maintain the decorum of the meet.

A fun loving feature which helps the users to put a background of their choice. The user can have a background of an underwater scene or Eiffel tower. This feature may look useless, but it comes very handy when the background is messier. It can very well hide the scattered clothes or a dirty bedsheet with attractive images.

At times, the background noises ruin the whole conversation. Kids are playing in the background or somebody’s watchingTV the deep learning algos can easily separate the user’s voice from the background and suppress the same with a white noise.

Work from home is a comforting strategy, and no matter how much you try- you may always find something missing. Integrate a Touch up setting for smoothing the appearance and make the users look well-rested. The feature would be similar to the beauty mode of your device’s camera.

Allow your users to record their meetings in their computer or laptop via the app. It should facilitate uploading of recorded files into different file storage devices like Google Drive/ Dropbox or video streaming devices like Youtube.

This feature helps the host to create a poll with which the participants can gather responses from other users on a specific topic.

When the meeting host ensures that the attenders don’t speak out in return- they should be allowed to so with this feature.

After the development of the server side, it’s vital to have a smooth and interactive user interface. Users don’t like spending a lot of time in understanding the app’s working. Take time in developing a simple, intuitive, and attracting UI for a better user engagement.

After deciding the platform and feature-kit, now is the time to have a look at all the technologies required for making an app like Zoom-

Upon deciding the project’s features and functionalities, and the platform of your choice- it’s time to finalize your development team. A good project development team must comprises of the following-

Ready to take the challenge?

Prove your spot in the market with the help of Matellio.

Feel free to shoot your queries in the comment box below. Happy Developing!