How to Pick a Reliable Partner to Build Your iOS App?

We are living in a world that is dominated by smartphones and tablets. Almost every person with a smart device looks for an app for any kind of service. To get that audience whether big or small all enterprises are developing apps for their business, product or brand. Many enterprises are now moving towards developing apps for the iOS platform and looking for an iOS app development company to ensure they can attract more customers and increase their customer base.

Talking about the market Android has a large market share than the iOS and the reason is that android is free to distribute. Despite the market having more Android users hence the number of Android app development companies, the trend in the market is changing. Most enterprises are no longer focusing on developing apps for a single operating system; rather they are eager to develop hybrid apps which is the futuristic technology. As a result of this high demand for apps, the industry is now worth multi-billion dollars.

As a consumer or someone looking to develop an app for his/her enterprise you might find there are many app development companies as well as professionals who offer outstanding services. There are also those who fail to offer quality products. So the task of finding the right app development partner is tough in the market and moreover if the app is made exclusively for the iOS platform.

People wanting to develop an iOS app is not that hard a task there are several tutorials available in the market where you can learn how to develop the iOS app. Apple has launched SDK with sample code projects so that developers can get started and the company also encourages developers to create apps that they can download via App Store. Apple also pays 70 percent of the revenue from the app to the developer. The only factor is as a developer you have to have a Mac to create the app.

Furthermore, the iOS app development cost is much cheaper and less time consuming compared to developing an Android app. But stating that as an owner of the app you should be aware of the audience and decide on the platform. However, if you are building an iOS app then you need to follow some of the criteria when choosing a reliable partner.

Tips To Choose A Reliable Partner To Build Your iOS App 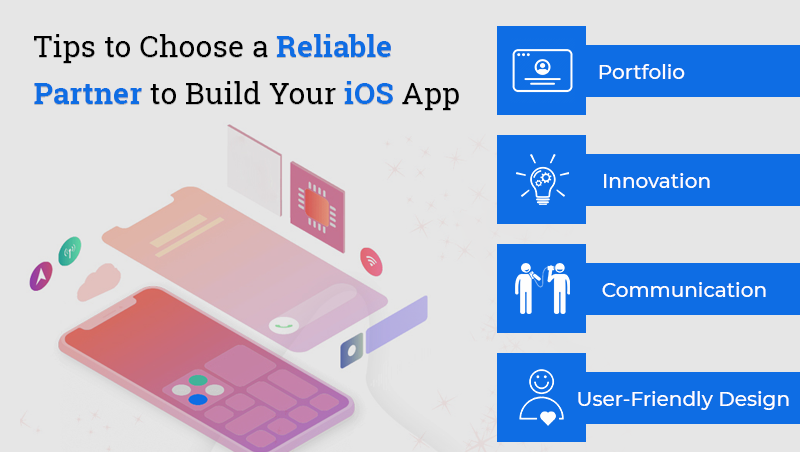 As mentioned earlier there are many companies and developers in the market and it is important to select the right one to partner build your app. Here is a checklist that can help you to select one.

This is because Apple and its operating system are unique and different from anyone else in the market. The developer is required to have the skill, knowledge, and equipment that can give the app a distinct look of belonging to the iOS platform.

There is nothing more boring than having apps that look and feel like they were from a few years back. So check the portfolio of the developers critically. See if they have been adopting new technologies, ideas and concepts in the apps they have been developing. Steer clear of any app developing organization or individuals whose designs look same for all the apps. Partner with an organization or individual who knows about modern trends and uses them every time they develop the app.

One of the key factors in making an app that suits your enterprise is allowing you to speak freely. It is important that the developer listens to you, understands your requirements and communicates with you.  An iOS app development organization or developer who prioritizes interactive communication model, keep the client updated with every development and take their feedback is the agency you should partner with for developing your iOS app.

Apple is known for its user-friendly attributes. So when you are looking to partner with a developer or organization have in-depth research on the kind of navigation scheme, visuals and other user-friendly features that you want to incorporate in your app. You would want to have an app that is aesthetic and enticing. A good developer would be able to offer all these with a difference while having an accessible design.

Whether it is an Android app development company or OS it is vital that you have conducted in-depth research about the agency. Check everything that the previous clients have been saying about the company. In case the numbers of reviews online are not to your satisfaction you can ask the company to show you the list of previous clients. You can contact them to get the actual feedback about the apps that were developed by the company.

It is true that there is a number of developers who are self-taught and does a marvelous job of developing unique apps. But if you are hiring someone who does not have a reputation like that then it is important that you check his or her qualification as a developer. Mainly if it is an organization, do check the entire managerial portfolio and the team’s qualification.

As someone who wants to have the best iOS app for your product, do avoid the pitfalls like:

Hence partner with some professional or company that can give you the app that your business and you deserve.

iOS app offers a great market and the potential customer base for businesses. Matellio has been developing iOS apps for years and has a team that specializes in iOS app development only. At Matellio we ensure that the iOS app development cost is competitive with the market without sacrificing the quality. Our team of iOS developers keeps themselves abreast with the latest know-how and technology of iOS app development.

How to Begin Goods Transport App Development for Your Logistics Business