Internet of things commonly abbreviated as IOT is a network of internet-connected objects able to collect and exchange data. Any device or object that can collect and exchange data over a network are referred to as “connected devices” or “smart devices” and are part of internet of things. The IOT may be a hot topic in the industry but it’s not a new concept. It has been in development for decades. The first internet appliance, for example, was a Coke machine at Carnegie Melon University in the early 1980s which could report its inventory and also could tell whether newly loaded drinks were cold. Today IOT is everywhere around us, smart cars which drives themselves are IOT, smart phones and computers bringing doctors and patients together virtually are IOT, smart buildings that reduces energy costs are IOT, its a world of things.. making a world of difference. According to Gartner, Inc. (a technology research and advisory corporation), there will be nearly 20.8 billion devices on the Internet of things by 2020. ABI Research estimates that more than 30 billion devices will be wirelessly connected to the Internet of things by 2020. Here are 5 IOTs which have made our life simpler. 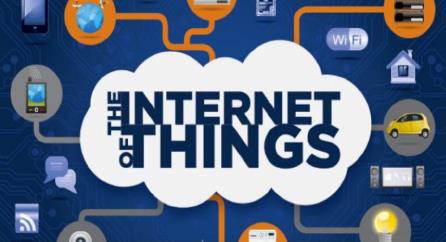 In a 2002 report titled Converging Technologies for Improving Human Performance, the U.S. National Science Foundation predicted that, within the next two decades, “Comfortable, wearable sensors and computers will enhance every person’s awareness of his or her health condition, environment, chemical pollutants, potential hazards, and information of interest about local businesses, natural resources, and the like.” Twelve years later, the future that the National Science Foundation predicted is starting to emerge.

The main objective of the development of Wearables is to get mobility in a different way. These small devices are more lightweight and user-friendly yet more efficient in performing various functionalities related to capturing input and monitoring activities. Wearable devices are installed with sensors and software which collect data and information about the users. This data is later pre-processed to extract essential insights about user.

These devices broadly cover fitness, health and entertainment requirements. The prerequisite from internet of things technology for wearable applications is to be highly energy-efficient or ultra-low power and small sized.

Here are some top examples of wearable IoT devices that fulfill these requirements.

The concept of this product uses a band that puts your device’s home screen on your wrist. This wristband brings full smartphone functionality to your arm. It’s all built around a tiny projector stashed inside the wristband. Aside from replicating your phone’s screen, it is also able to detect movements and inputs. The proximity sensor can track what is happening and relays commands to your device via Bluetooth. Cicret band is able to mirror Android, Apple and Windows Phone devices.

Navigational maps on the phone might be a big support for the die-heart trekker. But it is a pain having to walk unknown territory with your eyes glued to your smartphone’s screen. With these pair of Bluetooth-connected shoes that use haptic feedback to notify users which direction to take, navigational maps might become 5assé. You can buy ‘LECHAL’, (‘take me along’ in Hindi) as either a set of shoes or a set of insoles. Using GPS the app determines directions and notifies the user which side to turn by sending a mild vibration to the right or the left shoe. The app also functions as a fitness tracker and lets you check your record at places.

Smart watches are digital watches that are much more than the conventional analog or digital watches. These watches are full fledged digital tools. Smart watches can run apps and play all sorts of digital media, like audio tracks or radio streamed to Bluetooth headphones. Many of these watches have touchscreens, which allow you to access functions like a calculator, thermometer, compass and more. Some smart watches are made specifically for athletics purposes, letting you track your lap times, distance and route. They may work in sync with accessories such as a heart rate monitor or cadence sensor.

Smart Home technology intelligently gives you ultimate control over your home by automating the lighting system, dimming, blinds, electrical appliances, audio and security systems. Smart homes connect all the devices and appliances in your home so they can communicate with each other and with you.

A smart home is one in which the various electric and electronic appliances are wired up to a central computer control system so they can either be switched on and off at certain times (for example, heating can be set to come on automatically at 6:00 AM on winter mornings) or if certain events happen (lights can be set to come on only when a photoelectric sensor detects that it’s dark).

Smart homes may look like ordinary houses, however they are anything but passive and neutral. They intelligently and autonomously observe inhabitants’ activities, learn their behaviors and routines to predict and act accordingly, and adapt to changes of environment or people. These tasks are all possible as consequences of smart homes’ two main characteristics which are context-awareness and strong connectivity.

So, for example, it monitors light levels coming through the windows and automatically raises and lowers blinds or switches the lights on at dusk. Or it detects movements across the floor and responds appropriately. if it knows you’re home, it switches light and music on in different rooms as you walk between them; if it knows you’re out, it sounds an intruder alarm.

Smart Home is applicable in various aspect of our home and environment to suite our different preferences.

Apple introduced a new system last autumn – called HomeKit – that will enable you to have wireless and electronic control of your home, household features, activities, appliances, and more.

Apple developed the HomeKit framework so it could simplify the current state of home automation. For that purpose, Apple created a common language that smart devices from any manufacturer can understand and support. HomeKit also leverages Siri, Apple’s voice assistance, so you’ll be able to control smart devices with just your voice. 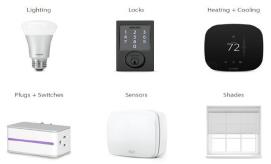 HomeKit allows seamless integration between iOS devices and home automation accessories, by promoting a common protocol and providing a public API for configuring and communicating with accessories. HomeKit enables a single app to coordinate and control a range of accessories from multiple vendors. Multiple accessories can act as a single coherent whole, without requiring vendors to coordinate directly with each other. 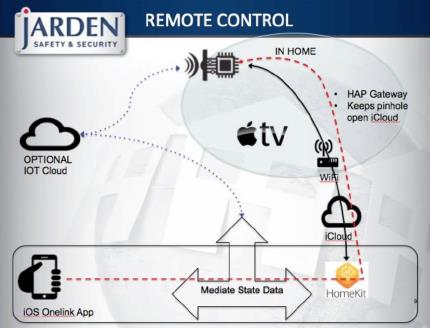 In October 2015, GE launched “Current”. What is basically Current in term of technology, It’s a startup that combines energy hardware with a digital backbone to make power simpler and more efficient for customers.

Former IBM Watson executive John Gordon just became Current’s first chief digital officer. A brief introduction about IBM Watson is “IBM Watson is working with businesses, scientists, researchers, and governments. With Watson, we can analyze and interpret all of our data, including unstructured text, images, audio and video”.

At IBM, John Gordon was responsible for launching innovation programs like Smarter Cities. Intelligent street lamps developed by Current are already gathering data in San Diego and Jacksonville. They could make everything from parking to traffic and law enforcement easier. So now we have so much queries in our mind regarding this technology. What is Current?

So atlast we can say about Current technology, Current will give us eyes and ears everywhere that are able to help us understand what’s going on outside. You end up with safer and more efficient cities for driving and parking, you end up with more satisfied citizens… all while paying less for energy than ever before. 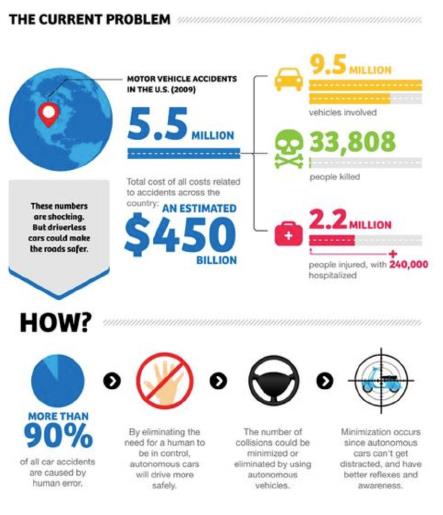 An autonomous car (driverless car, self-driving car, robotic car) is a vehicle that is capable of sensing its environment and navigating without human input. Autonomous cars can detect surroundings using a variety of techniques such as radar, lidar, GPS, odometry, and computer vision. Advanced control systems interpret sensory information to identify appropriate navigation paths, as well as obstacles and relevant signage. Autonomous cars have control systems that are capable of analyzing sensory data to distinguish between different cars on the road, which is very useful in planning a path to the desired destination. 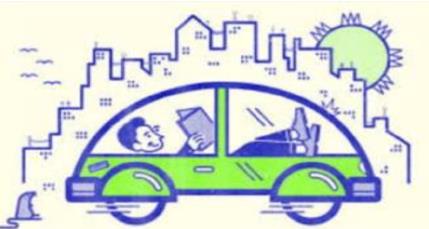 When it comes to the emerging technology of self-driving cars, major auto makers like General Motors and tech giants including Google get almost all the hype. Much of the attention is focused on how self-driving technology could affect consumers, as well as some key pockets of the market that rely on drivers, like cabs and ride-hailing apps like Uber. 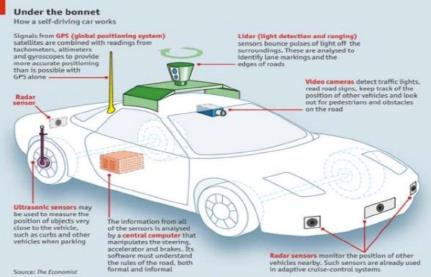 Drones have a long history as killer machines providing intelligence, surveillance, and reconnaissance for war managers. But over the years, their appeal has continued to extend beyond the corridors of military power. Commercially useful drones are not just remote-controlled aircraft, but, equipped with avionics, connections to ground control stations, sophisticated internal sensors that measure everything from yaw to acceleration, and GPS location capability. They are unmanned aircraft systems with increasing autonomy, whether fixed wing or rotary. With the advancement in drone technology, many companies have started putting sensors in their drones for collection of data. This data they collect can be used for various purposes.

There are different types of sensors that can be used in a drone to record different types of changes and collect a variety of information. Due to this, drones’ potential applicability pertaining to IoT has increased dramatically in the last few years, spanning multiple sectors, including Agriculture, Mining, Law Enforcement, manufacturing, Oil & Gas, Utilities, Media and Entertainment, and Infrastructure. A report released in 2015 by Business Insider projected a 19% annualized growth in market size for commercial and civilian drones between 2015 and 2020, as opposed to a 5% growth on the military front.

Here are several use cases for drones by industry.

No wonder businesses across different industries are increasingly adopting drones for a slew of commercial purposes, including for simplifying and automating complex workflows that entail increased operating costs and manual effort.

The Internet of Things promises to deliver a step change in individuals’ quality of life and enterprises’ productivity. Through a widely distributed, locally intelligent network of smart devices, the IoT has the potential to enable extensions and enhancements to fundamental services in transportation, logistics, security, utilities, education, healthcare and other areas, while providing a new ecosystem for application development.

A concerted effort is required to move the industry beyond the early stages of market development towards maturity, driven by common understanding of the distinct nature of the opportunity. This market has distinct characteristics in the areas of service distribution, business and charging models, capabilities required to deliver IoT services, and the differing demands these services will place on internet network.