Why is React Native the Future of Mobile App Development?

The exponential growth in the development of the dedicated app has evidentially transformed the role of apps into a mandatory aspect of the business model. Statista predicted that mobile apps would generate around $189 Billion in revenue. Now, it also lightens up the imperative requirement for a mobile app development company to mitigate time of development process, expeditious deployment, and optimal performance. Today, whenever businesses consider mobile app development, usually they entrap between Android and iOS.While the former proffers the advantage of better user experience, the latter equips developers with quick deployment and low development cost of an app. Significantly, the ideal option is a blend of both that allows the consolidated benefits of both platforms and bridges the gap between convenient development and incredible user experience. Additionally, React Native apps are developed using familiar technology to developers such as JavaScript, CSS or HTML5 and run across both platforms.

Why is React Native called the future of mobile app development? 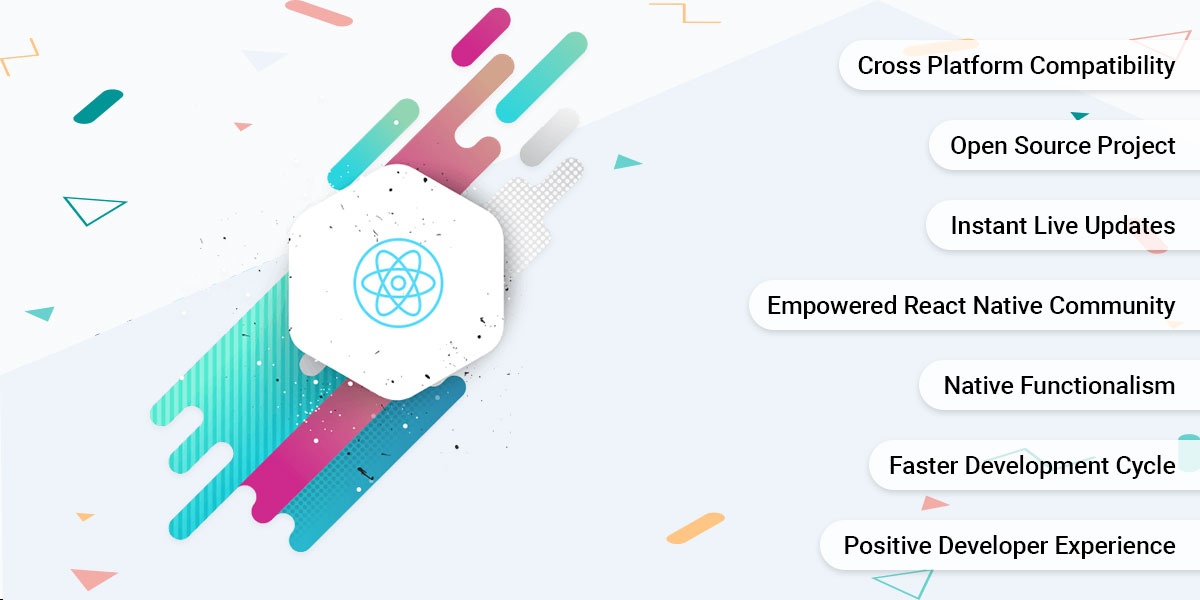 The foremost reason behind its dynamic usability in the near future is its cross-platform compatibility. A noteworthy fact that after the development of code writing framework by iOS, Facebook successfully developed support with enhanced usability for android. Now, most of the mobile applications are developed with React Native, a cross platform APIs, that implies one app would run on both platform Android and iOS. In other words, it empowers developers to use similar codebase for developing an app for both platforms for an unfeigned and authentic experience of the specific platform. One of the key benefits of React Native app development is that it offers platform-specific file extensions which enable developers to interpret files for the device’s specific platforms and platform module for detection of OS for platform-specific implementations. It augments the probability of less time and cost in app development which extends the comprehensive efforts to develop an app using React native.

Here, React Native comprises a large community of active programmers who work consistently towards feature improvements, bug fixing and assist people in using these apps conveniently. So, now it would not be peculiar to have an app which has been basically developed by React Native members. It has transformed React Native app development and its use into a compelling solution which captured a substantial share of the growing mobile market.

Another reason for its significance in future mobile app development is the advantage of Live updates. The extensive use of JavaScript eliminates the need for using the app store to push update while in Native OS, developer has to go through the standard update process of Play Store’s or App Store. Now developers are able to push the relevant updates to the smartphones of users and equip them with an updated version of the application. It ensures that users would not encounter any kind of compromises like interrupted functioning with the app on their devices. Furthermore, the use of React Native has morphed the entire procedure, extremely simple and streamlined way. The developers can integrate CodePush SDK, a live update service of Microsoft with  React Native app to push updates to the app.

It’s noteworthy that app development services are perceiving the potential reasons to use React Native. It extends an incredible developing environment where beginners can have any kind of modification and implementations while the application is running and it eliminates the need to restart. Whenever any change is made to the file, the user interface is seamlessly refreshed by hot reloading. Moreover, it removes monotonous re-building and deploying process, which streamlines the iteration cycle. React Native employs flexbox layout engine for developing app layouts for Android and iOS.The developer would be required to learn only one layout engine for developing an app for both platforms. Additionally, it maneuvers easy access to the profiling tools and debuggers by embedding desktop chrome with React Native React through Chrome developer tools.

Today, every mobile app development company has experienced immense popularity of React Native which lies in its scroll accelerations, animations, keyboard behavior, and usability. It outperforms the actual native apps with an interface having the seamless operation and flawless performance. It also plays the role of being a framework for developing high quality apps without webview, and all apps built in this platform functions like a native app. Therefore, it comprehensively signifies React Native as a competitive solution to develop fantastic apps that combine components written in Java, Swift or Objective C. Developers are allowed to build part of the application to React Native for optimization of a few aspects of the app and another part of the app with the use of native code directly.

Evidentially, React Native apps development transfigures the process to develop mobile application expeditious due to a huge community of developers supporting React. The developers have experienced 30% time drop with the use of open source components. Furthermore, it is an open source project that extends a lot of components for use, making it economical from aspects of app development time cycle. React Native invariably allows the low probability of failures, by developing the most crucial single shared data layer for Android and iOS. Apart from this, Redux-the state management tool, with one of the prime benefits is to add directions for decoupling “what has happened” from “how things have changed.”

Developing an app on a new coding framework makes the developer concerned about the app’s future viability and support. Therefore, In the year 2018, Facebook developed the release repository for React Native, which permits developers to keep up imperative fresh releases in an extensive collaborative manner and offers the communication platform to have a conversation about the certain release. Further, It also introduced a dedicated repository for discussions and proposals through a safe environment for community members to discover conducive series of conversation related to React Native’s main repository. It has a sizeable growing community to support if developers are ever entrapped in any issues with future maintainance and support of the app. The React Native community is consistently enriching the under-development framework along with Facebook for setting a commitment for upgraded technology and improved futuristic goals. Now conclusively it standardizes the app development services and amplifies the development process of the application to meet the actual deadline.

Why Matellio is a Credible Partner?

Undoubtedly,  mobile applications have become an unavoidable tool for exponential penetration in the market and the use of React Native makes it much more effective and easier for developers. The vibrant growing community and affluent ecosystem signify that it will become a standard norm for developing mobile applications in a short time. Furthermore, the app experiences the benefits of React Native app development such as reduced timeframe, abundant resources and less cost with no compromises on performance, when you take services from a credible and renown company like Matellio. Matellio makes an edge over other competitive market with its experienced team, comptent developers and meticulous strategists.