As one of the server-side scripting language, PHP has been popular among the brands for a variety of reasons. PHP is known to be used by about 78.9% of all the websites whose server-side scripting language is known (Source). Its ability to let the web developers pay keen focus on the key fundamentals, develop highly scalable web applications, and enable rapid application development with highly maintainable code contribute to this popularity.

Laravel and CodeIgniter are the two names topping the PHP realm by extending great support to the PHP development. 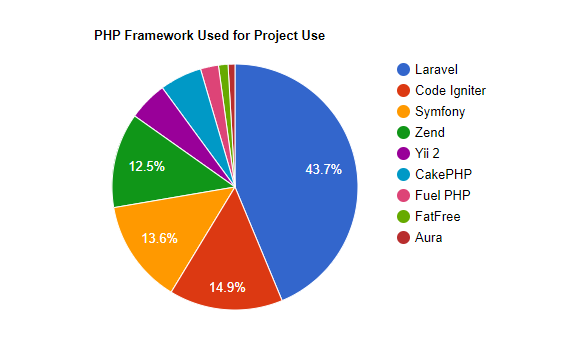 If you are in the process to develop a web application and facing hard times to choose between both, here we are analyzing both the PHP frameworks on various parameters to check which scales better and where. Let’s check it out.

Codeignitor is a PHP framework that enables rapid application development. It comes with a suite of extraordinary libraries that allows implementation of various operations without consuming too much time and efforts. Being one of the most expansive resources enabling hassle-free PHP development, CodeIgniter is the most sought after PHP framework.

It comes with a smaller footprint that provides simple, high-quality, and scalable web solutions. The PHP framework offers superior quality functions like code streamlining, hurdle solution, and even correct the issues encountered in professional websites. 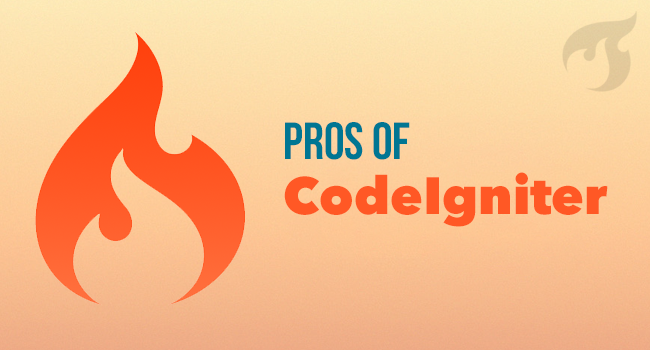 Unlike other frameworks, CodeIgniter is designed as a lightweight PHP framework and is known to have a small footprint. This makes it faster as compared to any of its alternatives. Along with this, a 2MB source code helps the web developers to ensure high performing web applications. Thus, they do not have to beat around the bush focussing on upgrading the site’s performance.

Whether you are an amateur web developer or an experienced one, CodeIgniter is easier to learn and implement. The availability of round-the-clock support in terms of active community and clear documentation. It also comes with easy setup options that enable users to configure common web development tasks.

Even though it encourages the usage of MVC, CodeIgniter does not force the developers to implement model-view-controller (MVC) architecture. That said, it also arguments that MVC enables faster development of even large and complex web applications. This modern separation concept helps programmers to use data models, libraries, controllers and HTML views.

CodeIgniter is not only one of the fastest PHP frameworks, but also helps the web developers to speed up the development by combining web page and database caching under one name. This also helps to reduce the server load by letting developers to cache the web pages in fully rendered stage.

That said, web developers are not restricted to follow this way strictly though. They have the flexibility to performing caching on a per-page basis following a certain time duration.

Security is one of the most important aspects in the vulnerable world. And CodeIgniter takes care of it in the best form. It provides a wide array of features that allow web developers to write secure PHP applications to deter common security threats like SQL injection, cross-site scripting attacks, and remote execution. With CodeIgniter, developers also have a scope to eliminate the security threats by calling back certain functions or choosing from an extensive range of available plug-ins.

#6. Easy to Extend and Customize

Scalability and customization are important for a web application to ensure popularity. The small footprint of CodeIgniter helps the programmers to ensure the same in the best possible way. The programmers can further extend CodeIgniter in multiple ways including class extensions, custom libraries, third-party plugins/ add-ons. 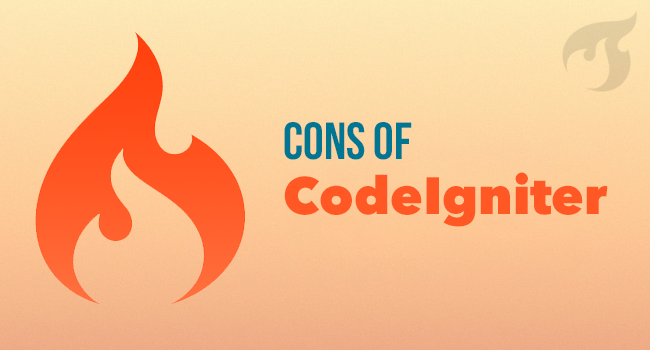 #1. Code Maintainability is an Issue

Enterprises these days are pretty focussed on developing applications with clean, readable, and structured code. This ensures that the applications are easy to maintain, modify, and updated in case the future requirements change.

However, unlike other PHP frameworks, CodeIgniter does not provide a scope for the same. Developers have to invest extra time and efforts to maintain and update the code.

Despite that CodeIgniter comes in with a great set of libraries, it falls short in this aspect due to the shortage of exhaustive libraries. That said, programmers can extend the native libraries to add features.

Laravel is another popular PHP framework that follows MVC architecture. Developed by Taylor Otwell, it was first released in the year 2011 as a free and open source PHP framework.

The extensive range of Laravel features include: 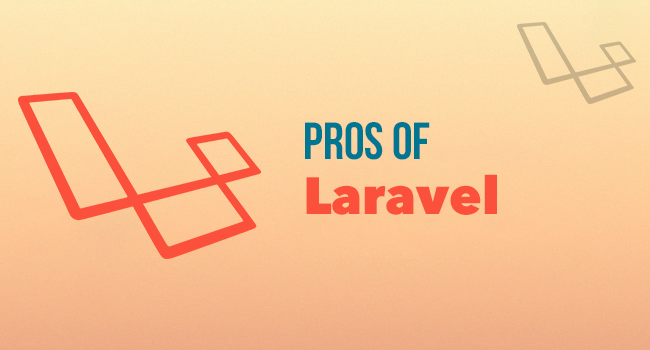 The feature that sets it apart from other PHP frameworks is its ability to leverage the latest features. Simply put, Laravel opens you doorsteps to develop applications with latest features like Namespaces, Interfaces, Overloading, Anonymous functions and Shorter array syntax.

Each version of Laravel comes with an extensive documentation that makes it friendly to the developer community. This also encompasses a good and detailed explanation to the coding styles, methods, and classes.

Venturing into the digital realm calls for finding ways to ensure that your users stay abreast of the changes you bring in to your processes. What could be the best way other than keeping in touch via emails. And Laravel takes care of this very well.It comes equipped with clean API over SwiftMailer library to help businesses with the same.

Writing code for repetitive functions again does not only irritate the web developers but also makes the process longer. This in turn increases the investments. Laravel helps you eliminate the chances by offering a command line tool Artisan. PHP developers can create a skeleton code to manage repetitive tasks. It also helps you create MVC files and managing assets, including the corresponding configurations.

Another benefit of using Laravel for web application development is its ability to offer npm packages and bower packages by combining framework with Gulp and Elixir. This widely comes handy in case of resource and asset revisioning. Laravel’s integration with the composer also help with dependency resolution.

Faster integrations and extensive support in the form of documentation and community helps with quick web application development.

IoC or Inversion of Control is a method of generating new objects without having to bootstrap the external libraries. Simply put, web developers can access the objects regardless of where they are coding from without dealing with inflexible monolithic structures.

Reverse routing is one of the most useful features of Laravel that allows you to create links to the names routes. Thus, when the need to create links arise, you can directly use the router name and the framework takes care of the rest by inserting the correct URL automatically. In case the links changes in the future, these modifications are automatically reflected everywhere.

Laravel paves ways for simple and intuitive ActiveRecord implementation to help you work seamlessly with the database. Thus, the models created by the web developers will have a corresponding table in the database to help you manage the corresponding data. It also offers a wide range of relationships including one-to- one, one-to- many, many-to- many, has- many- through, polymorphic relationships, and many-to- many polymorphic relationships. 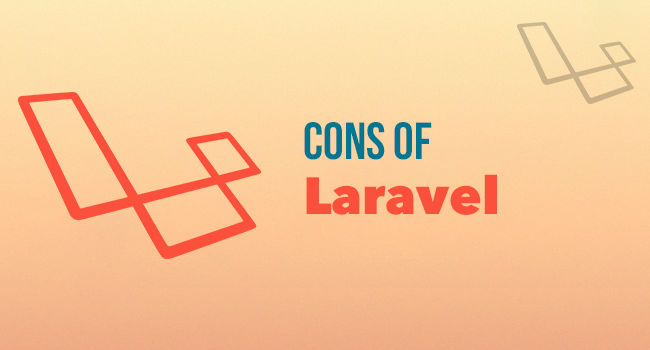 #2. Lack of seamless configuration between versions

The transition between various Laravel versions is not seamless. That is, if you wish to upgrade the web application’s code to the latest version, it could break the application.

#3. Quality is compromised at times

Some of Laravel’s components are not well-designed. For instance, dependency injection leads to unnecessary complexity at times. Additionally, Laravel documentation has not been designed for someone at a beginner’s level. In other words, it is heavy for someone to comprehend. Besides, using Laravel requires you to learn a lot before you finally build the applications.

This makes it a bad choice for someone who is an amateur.

This is not solely a Laravel problem, but PHP frameworks do show problems for long term support versions as the upgrades may turn problematic. So the developers are advised to take precautions before upgrading a mobile application/website.

Full-page reloads can be a bit heavy in mobile apps when compared to websites. Therefore, web developers tend to use the framework as backend JSON API only.

So Finally, who Wins?

Logically speaking, none of them can be referred to as a clear winner or loser. While one outshines other on some aspects, other one has a plethora of reasons to take an upper hand. In this case, if you want to choose what suits best for your business application, it depends on multiple factors including the type of applications, your goals, business model, etc.

An expert web development company like Matellio can surely help you decode what goes best for you. Maybe you can share your idea with us now and have your queries answered quickly.