How IoT Affects the Future of Web Development?

IoT has transformed the way we do business and live our lives. It has streamlined many formerly complicated and tedious tasks to enhance business productivity and efficiency. Today, IoT-based software is a massive industry and companies big and small are investing heavily in it to become more connected, smarter, and environmentally responsible. In fact, according to the stats, global IoT spending will be somewhere in the vicinity of $1.1 trillion in 2023 alone! Furthermore, around 83% of the organizations that have adopted IoT on a small or large scale, say that the benefits of IoT implementation outweigh its risks.

In fact, according to the stats, global IoT spending will be somewhere in the vicinity of $1.1 trillion in 2023 alone! Furthermore, around 83% of the organizations that have adopted IoT on a small or large scale, say that the benefits of IoT implementation outweigh its risks.

At the same time, due to their immense popularity and countless real-life applications, IoT-based appliances and devices have penetrated the consumer markets like no other technology before. According to the stats, there were more than 10 billion active IoT devices in 2021, a number which is expected to reach 25.4 billion by the year 2030.

Whenever we talk about IoT, we are talking about a network of interconnected devices that are exchanging real-time data with each other and the backend user via an IoT platform. These IoT platforms let users access the IoT data, control IoT devices remotely, and perform advanced operations such as trend detection, behavorial analysis, etc.

Now, a website built using traditional web development methods can’t support the deluge of data passing through in both directions: devices and users. The massive overload of data will grind the website to a halt and lead to countless other issues. Furthermore, IoT data requires a lot of advanced computations and a dynamic UI to fit the ever-changing needs of the users. These things are too tall of orders for any traditionally built website.

IoT web development allows developers to build websites that use the cloud networks as data highways between various entities and stakeholders. These websites support real-time data and instruction exchange between a user and the IoT devices. Furthermore, integration of tools such as chatbots is also possible with IoT web development.

When coupled with other next-gen technologies such as AI and Big Data, IoT websites can provide even greater benefits to admin and normal users. Admin users can use the vast pool of real-time data being streamed by the devices and study it with the help of Big Data and ML to gain crucial information. Consumers on the other hand get personalized experiences crafted dynamically according to their habits, historical behavior, and even likes and dislikes.

Below, we’ve listed some aspects and critical points that IoT brings in web development. 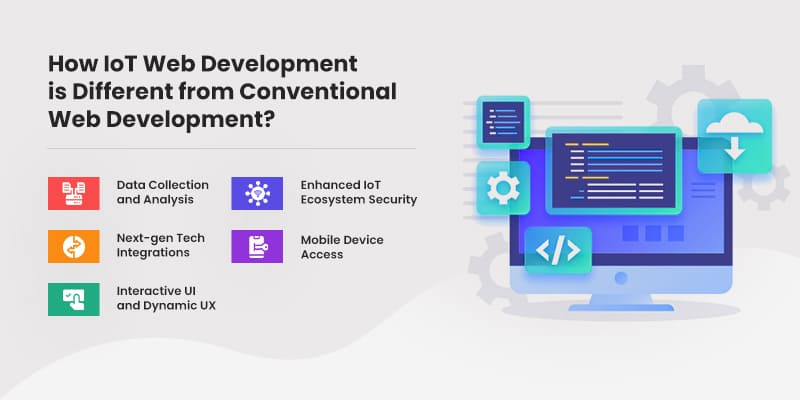 One of the founding concepts of IoT is real-time data gathering to understand system, environment, and user behavior. The idea is to accumulate granular data to further users’ understanding and use it to build better plans, processes, and products.

But collecting the data alone is useless; users must be able to utilize that data to perform certain actions. For instance, in a retail store with an adequately large IoT deployment, managers use IoT devices to collect customer buying habit data. She wants to run in-store targeted ad campaigns for different age groups. So, using an IoT website, she will not only be able to get customer data but also filter it according to their age groups and then study their behaviors separately. Based on the results, she can then put up ads in the most prominent places in the stores where they will be most visible to a customer from a certain age group.

Such operations are impossible to do on a website built with traditional means.

While IoT alone is very powerful, it becomes significantly more powerful when integrated with other next-gen tech such as chatbots, AI-engines, ML models, etc.

Chatbots have become a staple of most websites, no matter what industry they belong to. There are many off-shelf chatbots out there that you can buy and then integrate in your website. However, these chatbots rarely go beyond helping users with some basic issues. For high-intensity business settings, you need to integrate your chatbot with more sophisticated chatbots, like IBM’s Watson.

These chatbots work on NLP and ML technologies to mimic human conversationists. Furthermore, using advanced analytics and ML-based trend detection, they can fetch even most complicated of data sets and reports for the users.

For example, A wind energy company with hundreds of windmills frequently rents out its some less-used wind turbines to other companies. With them, it also gives them access to their website’s admin side from where they can monitor the wind turbines that they have rented.

Now, if a user wants to know how many megawatts of energy was created by ten windmills in a particular time period, then they can use the chatbot to fetch this data. The chatbot will understand the query written in normal conversation form, like “Show me energy produced at A, B, C,…. between X and Y”, thanks to NLP. The data, if available, will be fetched and shown to the user. Similarly, users can ask for charts and other graphical representations.

IoT web development allows developers to build more interactive UI with a plethora of new features. For instance, voice interactions are a very popular addition to websites these days. Users can search for a product or ask a query by speaking directly into their mics. The voice interaction engine converts users’ voice commands into a computer-understandable form and then provides a response. The response can be a search result page or a voice response giving users the requested information. Integrating this feature however in an IoT environment is challenging since the data bank is constantly growing and requires a lot more computations than a simple search query. For instance, if you ask the same question we asked the chatbot in the previous point but this time using voice interaction, then the website will have to do a lot more processing. Therefore, IoT web development is essential to create a more interactive UI.

With IoT, users are able to get more personalized experiences. That’s why, a website must support dynamic UX to enhance the personalization aspect of IoT.

Also Read: How Voice Technology is Transforming the IoT Landscape

IoT deployments require sophisticated cybersecurity measures. In a network as intricately connected as any IoT network, a single compromised node can lead to terrible consequences. From data theft to complete system paralysis, there really is no limit to the destruction hackers can cause in an insecure IoT environment. That is why websites that act as access points for IoT networks need intense security measures to ensure system and data integrity. IoT web development allows developers to build more secure websites.

Data corruption is also a very big threat in an IoT ecosystem. A hacker can very easily start sending corrupted data to other devices if he gets access to an IoT hub. That is why IoT deployments require node-level and back-end level security.

For instance, in a smart home with many IoT devices such as AC, automatic locks on doors and windows, thermostats and HVAC systems, etc., mobile devices can be used for remote access and control. If you want to check the temperature in a room while you’re outside the local network, you can access the website and check the thermostat readings. Then, based on the reading and your requirement, you can turn on the AC or HVAC for specific rooms. Smart HVAC provides localization which prevents energy and gives users more control.

All of this is achievable with IoT web development. Traditional web development while provides remote access via mobile devices, the exchange of data can’t be instantaneous. Furthermore, personal assistants like Alexa and Siri can also be used by the users for a certain query. In that case, the website will have to integrate itself with the on-device assistant. Such complex use cases make IoT web development almost essential for an IoT deployment.

Internet of Things is enabling us to run our businesses more smoothly and efficiently. With the help of task automation, customer profile creation, and AI-based analytics, businesses are also targeting their customers in a much more effective way and are increasing their revenues. By elevating productivity and streamlining areas that were previously complex, IoT is transforming the business world.

At the same time, IoT’s real-world applications have made it a darling technology in the consumer sector with plenty of innovation happening on and around it in different industries. From smart watches to various types of other devices, IoT is changing how we interact with machines and what they can do for us.

If you are looking to hire IoT developers to build your website, then Matellio is the right technology partner for you. We have years of experience catering to the need of businesses from various industries. Our highly scalable IoT web development services have been designed to help businesses of all sizes. IoT experts at Matellio excel at identifying pain points in your organization and leveraging their superior knowledge and IoT development skills to create target-oriented and high-value solutions.